Letters from the Inside 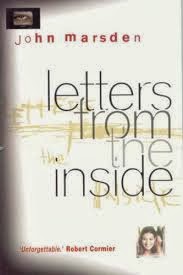 I'm quite familiar with John Marsden. After all he is certainly one of the masters of Australian YA writing. I've read quite a few of his books, but all more than a few years ago and before I began book blogging in earnest. He wrote the Tomorrow, When the War Began series, and many other books. John Marsden is also a teacher, and school principal- he set up his own school, Candlebark School in Victoria in 2006.

Master Wicker was given Letters from the Inside by his English teacher at the end of last year, it is to be their first book for the year this year. He read it over the holidays, and I thought I should too. It's interesting that all the books he's been given as assigned reading in high school have been Australian so far. Last year his class read Jackie French's Hitler's Daughter, and then the first two books in  Isobelle Carmody's Obernewtyn Chronicles - Obernewtyn and The Farseekers.

Letters from the Inside is a masterly epistolary novel. Two 15 year old girls begin a penpal friendship after Mandy answers an ad Tracey has placed in a magazine. The girls get to know each other and we get to know their stories as they begin their correspondence. It's gripping from the start, but soon becomes even more riveting. Both girls have a variety of family problems. Both girls have their secrets. We readers learn some, but not all of these secrets, problems and triumphs in their letters to each other over the course of a year.

There are quite a number of particularly adult issues in Tracey and Mandy's lives and in their letters. Possibly slightly too much adult stuff for the soon to be Year 8s I think. Apparently Letters from the Inside is usually used in higher years, and I think I would be happier with that. Not that I'm the complaining, book banning kind generally. Besides we've both read it now. I just think Master Wicker would have got more out of it in a few years. For instance he didn't understand the rather major event in the last few pages of the book- whereas several of his female classmates did. Still I'm glad to have had the chance to read it, and will be interested to see how the classroom discussions go over the next few weeks.
Posted by Louise at 21:50

I love epistolary novels! I'm always looking for good ones.