January 2014 has been a big Dahl month at Chez Wicker. I'm reading three of his books, one associated book, been listening to his books on audio and generally loving the Dahl vibe. So I decided to branch out a bit too and learn a bit more about the man himself.

Roald Dahl not only wrote fascinating stories, he lived a fascinating life too. The basic facts are pretty well known. Born in Wales. Lived in England. Worked as a spy during the war. I wanted to go a bit deeper, so sought out the only two biographies in my library about Roald Dahl. 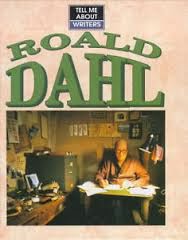 The first one, Tell Me About Writers Roald Dahl, took just a few minutes to read. But I learnt so much cool stuff about Roald Dahl.

Roald was a prize winning orchid grower. Roald's father Harald Dahl lost an arm as a young man when he fell off a roof.Roald was a great collector of modern art. If I had known that Roald's first wife was Patricia Neal, an American actress, then I'd forgotten. I'd learnt recently that Roald Dahl had helped develop a cerebral shunt after his son Theo was injured in an accident. Here I learnt that he was injured when his pram was hit by a taxi in New York.Quentin Blake based the drawings for The BFG on none other than Roald Dahl himself. 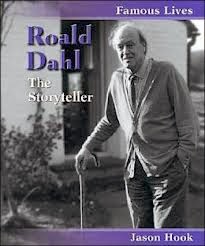 The other book I borrowed was Famous Lives. Roald Dahl. The Storyteller by Jason Hook. A treasure trove of great facts.
Among the items Roald kept on a desk in his writing hut was a heavy, silver ball, made entirely of chocolate wrappers; a carved grasshopper; his father's knife; the cerebral shunt he helped develop; a model of a Hurricane fighter plane, and his own hip bone. Harald Dahl's left arm had to be amputated after an accident as a 14 year old. Sorry I but I do like the gory medical details. As a young boy Roald heard Norwegian folk tales from his mother about giants and witches. I knew that Roald had been in a plane crash during the war (I read Boy a few years ago, and may have read Going Solo too)- he crash landed in the desert in Egypt after he became lost and ran out of fuel. He just managed to drag himself clear before the plane burst into flames. Roald spent six months in hospital recovering from his injuries. He became a published writer with the aid of CS Forester (of Horatio Hornblower fame), who asked Roald for some notes to help with a story. Dahl wrote a complete story and Forester sent it to The Saturday Evening Post, who published it. You can hear Roald tell the story himself:

Through the magic of the internet- we can still read that first story!
I hadn't heard of his first story for children, The Gremlins- and we can read that too! It seems gremlins as a term came from the RAF during the second world war as little imps causing mechanical problems on aircraft. Disney published that story, and it's still in print, but I've never seen it before in shops, and it doesn't seem to be one of the 6,002 Dahl titles that are published by Puffin. Perhaps Disney is still hanging on tight to it? It just adds even more to the ever growing, never diminishing TBR. Roald made rich and powerful friends while working in America as a spy during the war. After the war he made a living for a time buying paintings and antiques for his new wealthy American friends. The nanny was pushing little Theo's pram when he was struck by a taxi. He was 4 months old, and had a badly fractured skull. He needed a series of "dangerous operations". Theo didn't end up needing the valve that his father helped develop. In 1965 Roald's wife Patricia suffered three strokes while pregnant leaving her crippled, blind in one eye and unable to speak. Patricia had to learn to speak againHer words came out muddled: a 'spoonful of sugar' became a "soap driver", a cigarette was an "obliging". Dahl would later remember this when he wrote about a tongue-twisted giant in The BFG. Roald used to tell his children that their dreams were created by a big, friendly giant who blew magical powders through their bedroom window. He would then say goodnight, and creep out into the garden. Easing his creaking bones up a ladder, eh would slide a bamboo cane through their window, and gently blow.
Many of his stories came from stories that he made up for his own children- certainly a common theme for many of the great writers for children.
In his final years, Dahl became a very controversial figure. He made an outspoken attack on Israel, criticised the author Salman Rushdie, and reportedly turned down an OBE because he felt he deserved a knighthood.
There's just so much fascinating stuff. I wonder if he was a curmudgeon, or just opinionated?
A quick google, and Oh WOW! News of a recent biography about Roald Dahl that is trying to burst my Dahl bubble.

The much-loved, best-selling children's author, one of the UK's most popular post-war writers, was a man of considerable fury and contempt for people who crossed him, or whom he considered beneath him. The creator of Willy Wonka, the Twits and Fantastic Mr Fox was often less than fantastic as a human being. He was an anti-Semite, a chronically unfaithful husband and a raging bully to business associates, teachers and friends. The creator of the Big Friendly Giant could easily, it seems, transform himself into a Big Unfriendly Bastard.

Can this really be the same man?

"I think probably kindness is my number one attribute in a human being. I'll put if before any of the things like courage or bravery or generosity or anything else. If you're kind, that's it."

I might leave off reading that newer biography for a while. I want the Dahl magic to continue. That article actually takes big swings at most of the major names of classic British children's authors.
There were lots of more conventional and widely known Dahl details in these books, but these I thought the most intriguing.
Posted by Louise at 23:25

I have a bio on my TBR about his years in the war in the US in Intelligence: Jennet Conant's The Irregulars. It looks fascinating,and I hope to get around to reading it this year. The type of bio that sets out to sensationalize the hero's failings isn't really my thing, so I hope this will be a gentler introduction to the man.

Sounds like he had quite the life. How did you ever find out about him.