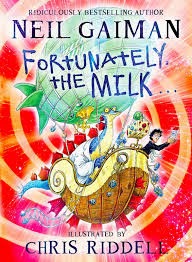 Is it wrong to publicly admit that I found Fortunately, the Milk a bit of a disappointment? Probably. But sadly I did. I certainly wasn't expecting to. I've only read a few Gaiman titles so far, but have enjoyed them. The Graveyard Book. Coraline. Wolves in the Walls. I've seen a few movies based on some of his other books. Stardust. And Coraline of course. He has even written a few episodes of Doctor Who. All are quite amazing excursions into the extraordinary imagination of Neil Gaiman.

I'd heard great things about Fortunately, the Milk and was pleased to find it at my library recently. The premise is great.


There's no milk for breakfast, can a simple trip to the shops to get some milk really change your life and save the world? It seems it can when you get abducted by aliens. And then the silly stuff really starts happening. Neil Gaiman acknowledges that Fortunately, the Milk is the silliest, strangest, most ridiculous book he's ever written.

Sadly, it was much too silly for me. I do like his inspiration in making Dad the hero. It is quite a valid point that Dads often die before the story starts. And that he wanted to write a fun book for kids, and adults who want to be kids.

The book is amazingly visual, beautifully illustrated by the wonderful Chris Riddell, who also illustrated The Graveyard Book. I hope the illustrations win a prize or two- they deserve to.  There's even a foldout centrefold which was a surprise. I'm glad it's not just me who thought that Dad looks a lot like a younger Neil Gaiman,

and that Philip Ardagh shares my concerns about the level of silliness. Although Cory Doctorow enjoys it much more, and shows us the rather fascinating differences between the UK and US versions ( which have different illustrators). But there are ponies, and that's a plus.

I do need to get time to read some of Gaiman's adult works, I am becoming more intrigued by him, despite this little speed bump in my admiration.
Posted by Louise at 14:33