It must be said that I'm not much of a follower of fashion, but in Paris in June/July 2013 I was immediately aware that Paris was awash in an orangey hue.

I came to calling it pamplemousse (grapefruit), after finding inspiration in the windows of Hugo and Victor.


Pamplemousse was everywhere, in the shops 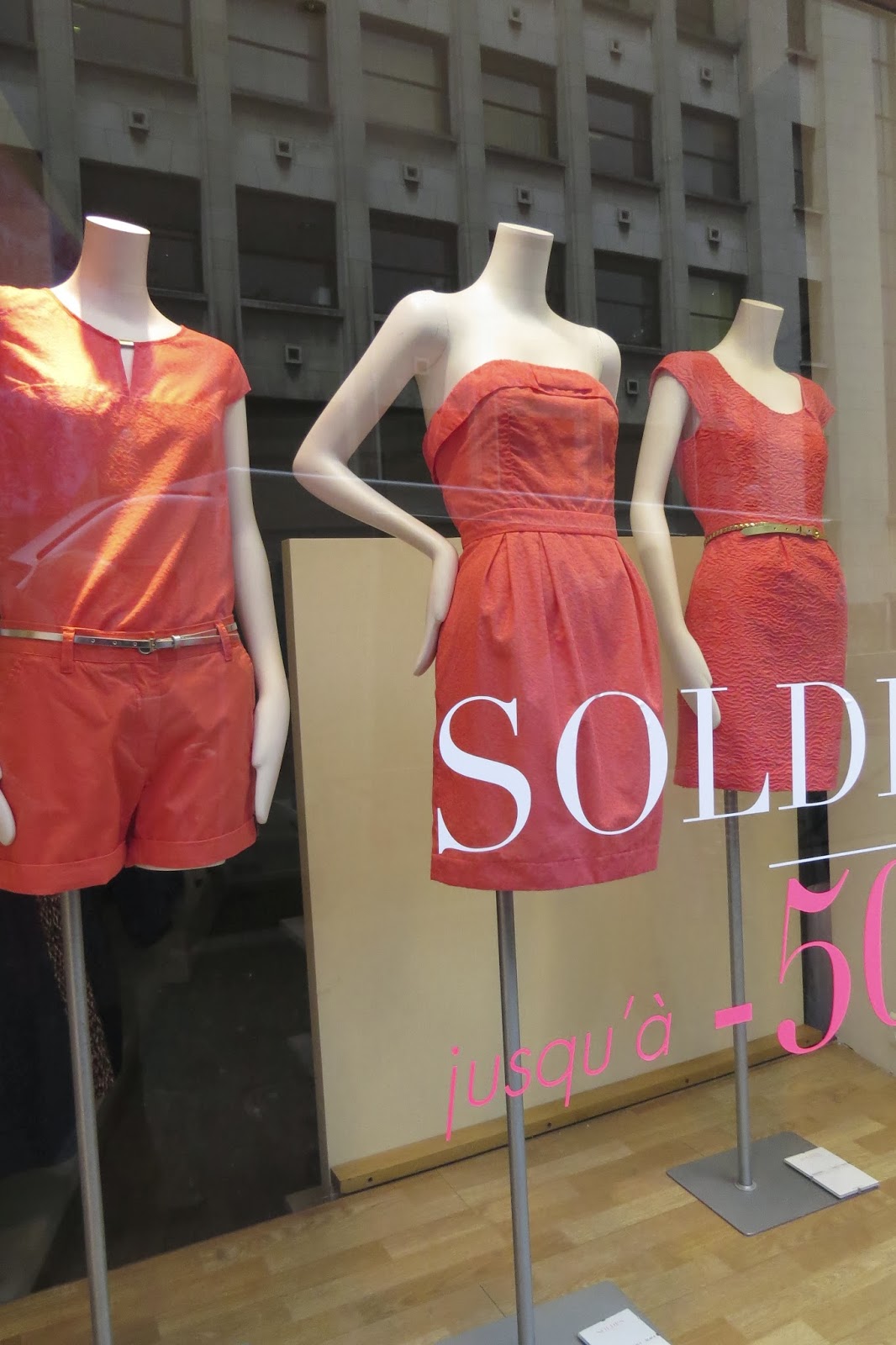 And on the streets,

And now I finally know why! Sometimes inspiration and answers can come from the most unexpected places.  Sometimes late at night you'll be sitting on the couch, kind of watching the tennis with Mr Wicker, but mostly reading the weekend papers. Sometimes you find knowledge there, or inspiration. Recently I was reading an article telling me that Radiant Orchid is the official colour of 2014. I hadn't known that there was an official annual colour. But it seems Pantone have been doing it for some time. Since 2000 actually.

Emerald did really turn out to be a big colour last year, and so did the red-orange "tangerine tango" the year before.


Red-orange "tangerine tango"! Could it be? Yes it was. Pamplemousse! I think I like the name pamplemousse better than tangerine tango to be honest. So even though pamplemousse was the colour of 2012 I'm certain that's why I saw it in Paris in 2013 (and am still seeing it even now on the streets in Australia).

Tangerine Tango sounds so harsh - I much prefer pamplemousse. Did you ever read any of the series about Monsieur Pamplemousse, by Michael Bond (who wrote the Paddington books)? They're sort of foodie detective stories.

Please let us know if you run across any more fashion tips from Paris. Sadly, we here in Alvin, Texas tend to miss these.

I agree on the name change too!
So many pretty pictures.
Who knew Pantone was calling the shots? Must go read that story!
Thanks!!

What a great color! But I do think it's one of those colors that only certain people can where. Have a great weekend!

Well, I think pamplemousse sounds much better than radiant orchid. I have a scarf, very similar to the one in your photo, and a couple of 'pamplemousse' dresses, and a cardigan, destined for the Oxfam shop, but I think I'll keep them and pretend I'm a fashionable Parisienne!My Snapshot is at http://goo.gl/usn8yL

I too am more found of pamplemousse. I think I will start to watch for radiant orchid and see if I can find a trend here in the Wild West of America! Might be interesting!

Wow, what a beautiful colour! Love all your photos... I think it just might have become my favourite colour now. And what a contrast with my Sat. Snapshot. ;)

Wow, what a beautiful colour! Love all your photos... I think it just might have become my favourite colour now. And what a contrast with my Sat. Snapshot. ;)

Yes, I'd choose Pamplemousse,too. Those shades seem prettier than orange, actually. I guess the tangerine aspects are showing through. Lovely!

I like the name pamplemousse as well. I'm not a huge fan of "orange" but pamplemousse just sounds so much more appealing!

That's a great color. I think radiant orchid will be pretty fabulous too. Here's Mine

I never knew there was an annual color either. I love your photos and was surprised to see Tropicana in France.

I never knew there was an annual color either. I love your photos and was surprised to see Tropicana in France.

It's everywhere! :) Those are some great pics, especially like the one on the bridge. And even on the orange juice! How fun.

I had no idea there was an annual color. I've been doing it wrong all these years and wearing color from days gone by!

I have a few plants that will make pamplemousse flowers in the spring but I could use some bright color here about now.

what a great post-I would never think to match pink with orange.

There is also the little girl series of early reader books called Madame Pamplemousse and the ...

Radiant Orchid is much better for my colouring - I look forward to seeing it everywhere soon. And now I know why so many of the dress shops have pamplemousse colours here as well!

You made my day! I did not know anything about Pamplemousse. I learnt something new!

Cool. I like your name for the color better, too. What a great theme for photos. I'm going to try to remember to steal that. I might even look up Pantone's color for the year before I travel.

What a pretty color. Thanks for sharing.

Oh I adore this post Louise!
I relate to it as I was in France June/July too and I saw pamplemousse everywhere!
I bought a light summer cardigan in the colour and thrashed it while I was there!
I Wanted some ballet flats but I have far too many shoes!