Pookie Aleera is not my Boyfriend 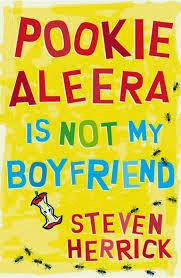 I've had a growing awareness of Steven Herrick for a while now, but had never read one of his books until very recently. I'm very glad that Pookie Aleera is Not My Boyfriend was the first one I read, but I already know that I will read more of his books. Which is quite an extraordinary thing for me to feel. Poetry is not my thing, I've had a life long aversion, that I think was created in high school, and verse novels are not my usual reading fare. In fact I had a hard time remembering if I've read one before- I think I have read one, but remained non-plussed. Til now.

Pookie Aleera is Steven Herrick's 21st book, and was shortlisted for the CBCA Younger Readers Book of the Year 2013 (won by Sonya Hartnett's The Children of the King), and also for every state that has literary awards- it was a joint winner of the West Australian Premier's Book Awards 2013.

Pookie Aleera is the story of a group of kids in primary school in an inland NSW town.

My town
is exactly
four hundred and twenty-two kilometres
from the ocean.


Pookie is a marvellous multiple point of view tapestry of the school pupils, and the school gardener Mr Korsky. Each of our narrators gives us a page or two most often and then we move on to the next. Gradually a picture builds up of the kids, their class, their school and their community.  Pookie is a warm, gentle story with moments of devastating sadness, about friendship and community and how even the little things can make a difference. It's beautifully written and reads like a dream. There's even two bonus recipes at the end- two Australian classics- Anzac biscuits and Chocolate Crackles.

Steven Herrick spends a lot of time touring Australia and the world, working in schools with many, many kids, and it shows in his writing. In 2014 he has 162 shows in 94 schools across NSW, Queensland, Victoria and South Australia. Now that's a hard working poet! He runs a rather fascinating blog, poetryfootballtravel, where he chronicles his three major passions. We get many insights into his writing process along the way.

All of my books are concerned with this minutiae of our lives. I’ll never write the great fantasy novel, the ripping detective yarn or the bold adventure novel. But I will attempt to tell stories with everyday characters who want to connect with their community; who want to feel loved and appreciated; who understand the value of friendship; and who want to make a difference to the people around them.And I remembered the tale of the Emperor’s New Clothes. How it sometimes takes a child to point out the obvious.Born in a hundred hotel rooms between Turkey and Spain, and nurtured in my study in Katoomba, I hope ‘Pookie’ tells we readers something about ourselves as Australians.


And also the struggle for recognition and earning a living writing poetry for kids.

Like every author, I hoped 'Pookie Aleera' would be met with positive reviews, requests for media interviews and never-ending sales. Ha! The book got quite a few very positive reviews in the usual magazines and the occasional daily newspaper. But, despite having a publicity department at UQP, I got zilch media interest. Nothing.'Pookie' disappeared, appreciated by a few thousand readers, ignored by the wider world. The fate of nearly every book.

The travel on Steven's blog is often achieved by bike, and more recently Steven has written two travel ebooks about cycling in France, baguettes and bicycles, and bordeaux and bicycles, both of which I've down loaded onto the iPad where they are awaiting my reading pleasure- but that does depend on wrestling the iPad away from the boys and their games long enough for me to read.
Posted by Louise at 14:13

That does sound an interesting book. I am going to try and find a copy for my daughter, who is just the right age. Perhaps it has paid off being a bit late getting around the snapshot.

"...ignored by the wider world. The fate of nearly every book." Oh dear. Let's change that.

I'm so glad you loved this book too - I also want to read more Herrick. Which means that I am happier than our eldest booklet at the news that The Simple Gift is one of his HSC texts :-)

Thanks for the link to Herricks blog too.

If you want to read another Aust verse book, try Emma Cameron's Cinnamon Rain (review on my blog).

Ginx- I hope you were able to find it.

Deb- I know, it's rather dispiriting isn't it. We are changing it- a little bit with our blogs. But there are just so many books, many of them do get ignored.

Brona- I'm glad that you've enjoyed it too. When I was casting about learning about Herrick I saw that The Simple Gift is often a HSC text. I've borrowed it from the library, but haven't got to reading it yet. I'll check out your review of Cinnamon Rain, I haven't heard of that one before.