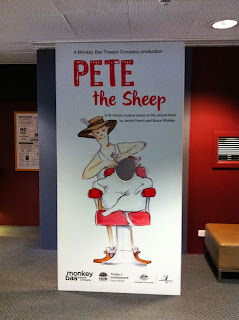 A few days ago I was lucky enough to go to a local performance of Pete the Sheep. Based on Jackie French's Pete the Sheep- one of her most popular picture books. It was a fabulous show. Monkey Baa are touring it nationally this year. It was very fitting to see it on Tuesday as Jackie French was announced as NSW Finalist for Senior Australian of the Year 2015 that very day. Current Australian Children's Laureate, still publishing an impressive number of books every year, is there nothing this woman can't do?

Monkey Baa is a fabulous theatre company based in Sydney, that adapts great Australian books into amazing theatre productions. Turns out Jackie French is a patron of Monkey Baa, along with Morris Gleitzman and Susanne Gervay. I've seen their production of Sonya Hartnett's Thursday's Child before, which was an incredibly intense theatre experience.

Pete the Sheep is a puntastic Aussie romp through the shearing sheds. It was great fun, and very funny- for both kids and adults. The packed theatre loved it, the kids were literally bouncing in their seats. A clever set, and very clever costume design allowed the four male actors to be shearers, dogs and sheep. Sean the Shearer comes to the traditional Shaggy Gully shearing sheds with his sheep-sheep Pete, and some fancy new ideas.

At the end of the show the cast did a question and answer session for the kids, where they explained the set, the costumes, and how the show was created. The writers initially spent a week at Jackie French's property researching shearing.  You can see a short video about adapting Pete the Sheep here, and a promo for the show here.

After the show I popped next door to the library to pick up a copy of Pete the Sheep for a reread. And the library gods shone down on me that day... 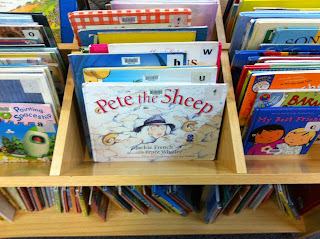 We support the Monkey Baa at work & even occasionally get free tickets for shows....but we always run them as a competition for our customers to win!

During their Gruffalo performance a few years ago, they sent out an actor in costume to help us with our storytime session.
It was a hoot.

I must see a show one day - perhaps with my little nieces & nephews - I've only ever heard amazing things about their performances.

PS The link on my AusReading Month should be fine. I checked the admin site and everything looks good.

But let me know if you still have problems and I can link it for you.

I hope that you do get to see a show soon Brona. They do amazing stuff. Thursday's Child was as moving as any adult play you'd ever see. Pete the Sheep is just great fun. They have some wonderful stuff coming up on their schedule. I often miss the touring shows as it's on once or twice, and I tend to be working.