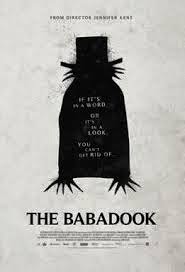 Horror is not my genre. I've avoided it for decades. I saw a few horror movies when I was a teenager, but I never really liked them, and gave it up as a bad idea very early. But sometimes when you have a baby you don't imagine that 14 or so years later your sweet baby will want you to sit down and watch a horror movie because that's what they like now. And so recently I found myself on the couch watching The Babadook.

I didn't really know anything much of the story. I'd worked out that it wasn't for me, and so had avoided it all really. And then Master Wicker pestered for long enough and finally got a copy of the DVD, despite me having not let him see it at the movies last year

The Babadook is your standard haunting/posession kind of story really. Single mother, Amelia, is raising her young son Samuel. She's doing it pretty tough really, they both are. Amelia is rather sweet, and works at a nursing home to make ends meet. Samuel is six years old, and has many behavioural problems to put it politely. He is obsessed with monsters, and wakes shrieking with nightmares every night. Neither of them are getting any sleep. Each night Amelia read a picture book to her son to resettle him back to sleep. One night The Babadook book is on the shelf, and that is when things start to get really messy.

Truth be told I didn't mind the first half of the movie too much. It was more a drama, family saga movie at that stage, and before the creepier events of the second half of the movie. Which naturally enough went a bit further than I would like.

Still overall I wonder if I want to entertain myself with such stories. No, no I don't really. Whilst I don't mind suspense or crime on tv, I think I'm happy keeping myself away from the horror genre. There are so many more worthwhile, nicer stories out there, I'd rather spend my time with them. Although I'm not thrilled that Master Wicker proclaims horror as a favoured genre, I am glad that my teenage son does still want to spend time with me, and show me things he likes. And I still like knowing what he is interested in, and professes to like.

Rather surprisingly the movie makers are crowdfunding a printing of the "children's book" The Babadook Pop-Up Book. I hope no one ever makes the mistake of giving it to, or reading it to a young child.
Posted by Louise at 06:28

It's still on at Cinema Nova here in Melbourne, and I was contemplating going to see it, largely out of a sense of guilt that I should be supporting Australian films. But I'm not very good with horror films either, at the time, although I quite enjoy shivering to them afterwards. (I'm thinking of Carrie, or that little wooden doll in Trilogy of Terror. Shudder). I'd quite like to see Essie Davis, but....I'm not sure...

I don't do horror. Horror sticks with me, and not in a good way...like eating a bad piece of meat.