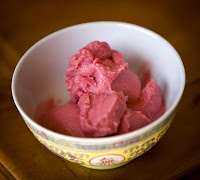 Now this is an amazing sorbet recipe. Sorbets and icecreams are so rewarding to make at home. They are so much more tasty than things available in plastic tubs in supermarkets, and of course you can make a dazzling array of flavours. You look like a culinary genius creating such stunning flavours but they are so easy to do!

This recipe spoke to me as soon as I saw it in the Good Weekend back in September. It was a great flavour and I know I want to make it again. I hope you make it and enjoy it, let me know. The recipe is by Andrew McConnell a chef now working in Melbourne who said that he created the recipe to serve with yoghurt cake a few years ago, but it's delicious enough to serve as a dessert in it's own right. Which is how we enjoyed it.

I of course have an ice-cream machine, along with most other kitchen gadget ever invented so I used that. The texture was sensational, very smooth. The colour was a gorgeous and vibrant pink. I made it over two days, simply because I ran out of time. It's very easy to do that with such a recipe. I did all but add the ginger beer one day, chilled the mixture overnight and added the ginger beer the next day and then churned it. It was probably the best result I've had from my ice-cream machine, so a days delay certainly didn't hurt things.

In a pan, simmer the grated ginger, sugar, water, lemon juice and zest and the vanilla bean for 5 minutes. Add the rhubarb to the pan and simmer until soft and pulpy.

Remove the vanilla bean and puree the rhubrab with the honey and all the poaching liquid. Strain the puree through a fine sieve and cool. Add the ginger beer and churn in an ice-cream machine.

If you don't have an ice-cream machine, pour the mixture into a plastic container and pop it into the freezer. After a couple of hours, crush the ice crystals that have formed, return to the freezer an crush every half-hour until set. The end result will be more granita than sorbet, but equally delicious.
Posted by Louise at 17:03 No comments:

I just can't get enough of these boys. Priceless.
Posted by Louise at 10:53 No comments:

Reading about the plight of polar bears makes me sad. Very sad indeed. Today, in the spirit of trying to read and then recycle some of the mounds of newspapers that I hoard until I have read them, I read a two page article from Good Weekend, printed back on March 31 2007. I'd picked up this article numerous times and always put it back down unread. Today I read it. And what a depressing read it is. Adult polar bears are losing weight. They used to weigh 295 kg on average in 1980, but were a mere 230 kg in 2004. There has been a 40% loss in the thickness of the Arctic ice in the past 25 years. The bears rely on the ice. They only feed whilst on ice, if it's too far between areas of ice they can drown trying to get to the next one.

And what is our government doing about this? Not much. Still not signing Kyoto. It's got a website. But what is it actually doing?

While they're still around, we can all enjoy things like this.
Posted by Louise at 10:17 No comments: