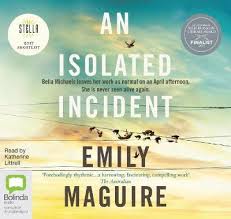 I've been meaning to read An Isolated Incident for at least three years. I saw Emily Maguire speak at Newcastle Writers Festival back in 2017. Remember when Writers Festivals were a thing? It makes me all nostalgic. I had a copy somewhere I bought back in 2017, but fear it has disappeared somewhere. Recently I found the audiobook on my  BorrowBox. A few days ago, I started listening, and then, four days later I was done.

An Isolated Incident kicks off grabbing our attention from the very start. A young policeman is knocking on a door to tell a woman that the body of her sister has been found.


It was the new cop who came to the door, the young fella who'd only been on the job a couple of months. I thought that was a bit rough, sending a boy like him to do a job like that. Later I found out that he was sent because he'd gone to pieces at the scene. That's what we all call it now: the scene.

Chris is a local barmaid, working at one of the four pubs in Strathdee, a small town in South West New South Wales. She is perhaps a bit rough around the edges, but she loved her younger sister very much. They had a difficult mother, and a difficult childhood for various reasons, and they've been very close as adults. Bella's murder hits Chris and the small town hard. Much of the book is told in first person narration by Chris.

The other narrative voice is May, a journalist who has come to town to cover "the story". To me An Isolated Incident was then somehow like a female version of Chris Hammer's Scrublands- which was also an audiobook for me, and another NWF connection! (see my review) Female author, female journalist. Female victim. An Isolated Incident is of course the earlier of the two books, but a similar story with a damaged journalist coming to a small town. Of course this perspective from the outside fills out the story a lot, and gives a broader perspective on the town and it's inhabitants. The articles that May writes for her online newspaper are included too.

I always enjoy a multiple point of view but the dual narrative was sometimes confusing, as changes in narrator are unannounced on the audiobook, which is an ongoing audio problem. Just a short pause between sections is all we ask. Too much? Seems to be. The print book has obvious spaces, give us pauses on the audio.

It also explores family, female friendship, marriage, infinidelity, our culture of alcohol. It is sexy and provocative in a way that is rather unusual for a murder mystery.

I've been listening to quite a bit of crime fiction over the past year since I listened to Scrublands really. I'm just about  half way through Nicci French's Frieda Klein series, and loving it.

The narration by Katherine Littrell (what a surname!) is masterful. She is astonishing actually. She is a trained actor- which really shines through, and does work in multiple accents  and dialects- Australian, New Zealand, American and British! Wow. Sadly most of the titles she narrates are not my cup of tea, but I'll be searching out more of her work.

An Isolated Incident was Shortlisted for the 2017 Stella Prize 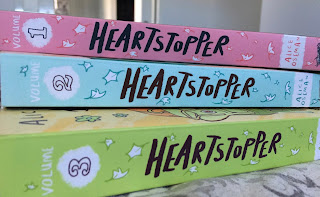 I'm sick this week. Not super sick. In pre-COVID times I would have gone to work and struggled on, But in these times of modern plague no-one wants to see you, no-one wants you at work coughing and spluttering and spreading viral particles, so I've been at home since Friday, seven days and counting so far. I have the rest of the week off for plans that no longer exist so I thought I'd try and knock over 7 books this week. A big ask for me any week. But what better excuse to finally get to Heartstopper?

I've been aware of Heartstopper for some time, but wasn't aware of the genesis and birth of these books. Nick and Charlie the two main characters of Heartstopper were first side characters in Alice Oseman's first novel, Solitaire, which is the story of Charlie's older sister Tori. I haven't read Solitaire, and it's certainly not necessary. Heartstopper stands alone. Nick and Charlie were born when Alice Oseman herself was in high school, and came to life firstly as a web cartoon  in 2016 on Tumblr and Tapas (never even heard of that one), and then helped over the school fence by Patreon and Kickstarter in 2018, becoming a major success and have since been commercially published.

Charlie Spring is 14 and in Year 10 at Truham Grammar School for Boys. He is the only openly gay boy at school having been outed the year before, he is in a secret relationship with Ben at the start of the book, but feeling used, and not happy about it when he is assigned to sit next to Nick Nelson in roll call. Charlie is the small, quiet, musical nerdy type while Nick is a rugby player in Year 11.

Volume 1 tells the story of Charlie and Nick becoming friends and even rugby teammates rather than names on a roll. Volume 2 is the story of their deepening relationship, and my favourite volume. While in Volume 3 there is a school trip to Paris.

Heartstopper is a lovely tale of nervous early days starting a new relationship, true at any age but especially for teenagers as depicted here. Insecurity, anxiety, self-esteem are issues for pretty much everyone, and regardless of the genders of the people involved. Charlie was bullied badly the year before when he was outed and this is a theme that carries through all the volumes. Identity, self-acceptance and kindness are also very well done.

I hope Heartstopper is widely available in libraries and particularly school libraries in Australia and around the world.

Volume 3 take a school trip to Paris. Which must be it's own kind of hell. They hit all the tourist hot spots. Monmartre. The Eiffel Tower. The Louvre. Shakespeare and Co. Yes, I was going - tick, tick, tick. Been to all of those. Even graphic novel drawings of Paris make my heart beat a little bit faster. And let me sneak in a post for Paris in July, from which I have been sadly rather absent this year. 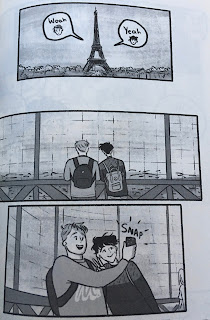 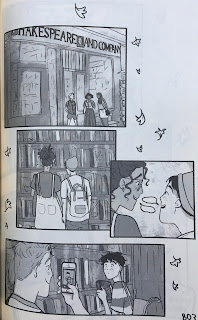 There's great use of social media and texting as befits a modern book about teenagers. 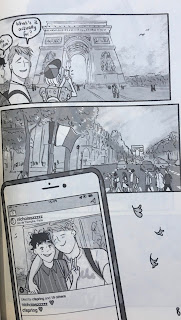 Heartstopper had a few major surprises for me. Alice Oseman is English and Heartstopper is set in an English high school. I'd presumed it was American. Not sure why.

At the end of the first volume there is a mix tape made by Charlie for Nick! Alice Oseman herself has put this list on Spotify. I listened to it while reading Volumes 2 and 3. I impressed myself by recognising the second song. Then realised it was Fleetwood Mac... the only other song I recognised was The Beatles. My teenager did much eye rolling.

I was hoping for further mix tapes in Volume 2 and 3, but no such luck.