Even we down in the Antipodes are starting to hear noise from the publicity machine that is grinding away in these glorious days pre-publication of Sarah Palin's memoir, Going Rogue, not released until November 17 2009 in the US. Interesting that the List Price is $28, while the Preorder Price is $9. It is currently ranked #2 at Amazon, and the Guardian claims that preorders for her book knocked Dan Brown's latest from the #1 spot at one stage.

Wow, just going to that page to get that Amazon link, I saw three shocking little words that never should have been grouped together Sarah Palin (Author). I personally would have been happier with Sarah Palin (Threat to World Stability). I think even I'll start taking to the streets again in protest if she ever gets elected to any American position with any scent of world power.

Of course as with anything involved Sarah Palin there will be two rather diametrically opposed camps. The spoofers are well-prepared and have several books ready to go. I do hope that even far flung places get a chance to buy Going Rouge, The Sarah Palin Colouring and Activity Book. 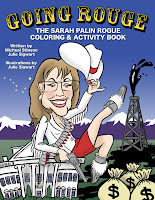 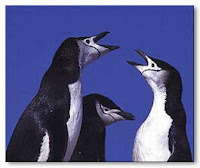 I recently became aware that a childrens picture book had topped the American Library Associations most challenged book list for the third year running. Of course I immediately wanted to read it and requested it from my library.

and tango makes three is the true story of the behaviour of a pair of boy penguins called Roy and Silo at Central Park Zoo in New York in the late 90s. Roy and Silo, formed a bond, hung out together, and made a nest out of rocks just like the other penguins did. They even tried to incubate a rock. Cute. Their keeper had of course noticed this behaviour, and in 2000 when another penguin couple had two eggs they gave one of their eggs to Roy and Silo to incubate. This other pair had had two eggs before but never managed to raise both chicks. Roy and Silo did an admirable job, and 34 days later Tango (it takes two, oh dear) hatched.

This book has been very controversial since its publication in 1995. People like Steve Walden get themselves all in a lather about it. I'm not sure that poor Steve gets the point. The keeper didn't really "steal" an egg from other penguins. He gave Roy and Silo an egg that he knew would not hatch if left with it's own parents. And the book isn't about sex. It's about penguins.

Sadly all did not end up rosily for Roy and Silo. I do love the quote at the end of this article from the authors

"The book is" no more an argument in favor of human gay relationships than it is a call for children to swallow their fish whole or sleep on rocks.

Interesting evidence from that same article that will please the opponents of this dreadful book about penguins- Tango has paired up with a female penguin, Tazuni, for the past two seasons. Man, they're right, exposure to this story will do enduring harm to our children.

Being a reckless kind of parent I read this book with my 8 year old son tonight. He's a bit beyond the picture book stage now, although he knows I like them and that occasionally I'll pick one to read with him when he's running late for bedtime and we don't have time for a few chapters of whatever book we're actually reading together. Being the son of a reckless parent, he liked the book. He liked that chinstrap penguins weren't endangered (the author's note at the back states that there were 42 chinstrap penguins at Central Park Zoo, and over 10 million worldwide). I think he saw it as an environmental tale rather than any exposition of homosexual love. He has a keen interest in the natural world, and we've read many books where the young were raised by animals other than their own parents in efforts to conserve a species, including the wonderful Old Blue (one of his enduring favourites about how the Chatham Island Robins were saved from extinction).

Thankfully unlike Steve Walden I didn't have to spend an hour "undoing the damage" that this book had wreaked, nor did it wreck my entire evening. And my son, he just went to bed.
Posted by Louise at 15:49 2 comments:

I do love the occasional lamington, but have never really wondered about how these fabulous morsels came into being. Luckily, the SMH answered my unanswered question yesterday. Although The Age has an online version that includes a picture of the alleged creator, Armand Galland.

Galland was a French chef working for the Governor and Lady Lamington in Queensland's Government House just before the time of Federation. He used the French technique of dipping cake in chocolate and is thought to have been inspired by his French Tahitian wife to add coconut to his creation. Whatever his inspiration, it was truly divine, and I thank him for it.
Posted by Louise at 15:04 2 comments:

You'd think that the craziest stuff ever is happening in the modern world, but well, you'd be wrong. There's been amazing stuff going on for centuries. I love reading the Body Parts You've Never Heard Of column by Dr Adam Taor in the Weekend Australian. Sadly, I do think he's only ever come up with one bit that I'd never heard of. It's always Fascinating though, check it out. It is a bit buried, it's in the Health section which is at the back of the Professional section, which I would otherwise turf straight into the recycling with the sports and cars sections. Dissapointingly, it doesn't seem to be online. Any quest for enlightenment does involve some work.

I just read the column from 18/4/09 about the Pouch of Douglas. I'd never really thought about who Douglas was, but it turns out James Douglas was a Scottish Obstetrician in the early parts of the 18th century. Another of his claims to fame, apart from his eponymous pouch, was exposing Mary Tofts birthing of rabbits (yes rabbits!) as a hoax. You really wouldn't credit that it would take a team of experts to prove that a woman who delivered such objects as bits of rabbits lungs and a cats leg as well a loony, or attention seeker at the very least. Mary was apparently an illiterate maid who claimed that she was pregnant with rabbits, after craving roast rabbit during her previous pregnancy. She kept up her story and apparently produced multiple bits of mangled rabbits until she was threatened with exploratory surgery at which time she cleverly gave up the game. What can her motivations have been? Money? Fame? Infamy? A rather wobbly grasp on reality, and a lot of unfortunate bunnies?

There's quite a bit about her out there on the internet. She has her own page on wiki, and this is another interesting page with a picture of our Mary and a very scared rabbit.

I think she's become my new hero. At the very least it's a fantastic story. You never know where the next little fascinoma will pop up do you?
Posted by Louise at 19:48 2 comments:

All Sorts of Stupidity 2

So, a woman in Berlin jumps over fences at a zoo, to finally jump into the water with the polar bears during their feeding time and the headlines on the SMH screams Woman attacked by polar bear in Berlin! HELLO. She jumped into their water during feeding time, the polar bear hardly "attacked" her. Do we seriously have no personal responsibility left? OK she probably is mad, but she wasn't attacked.
Posted by Louise at 22:16 No comments:

All Sorts of Stupidity 1

It seems it's been quite a while since anything has fired me up enough to remember how to log in to my blog. But eventually someone, somewhere will be stupid enough to do it. Just in the last week there's been a few examples of crashing stupidity.

First off the rank, career counselling for preschoolers. What a fantastic idea that is. Let's plough money into career advice for those not old enough to tie their shoe laces, or think as far ahead as what they'd like for dinner. Tremendous. Forget about giving them access to books, making sure they can read, or checking that they can see or hear, or have access to a decent meal. We need them to think outside the box about career choice.

Next: career counselling for toddlers

Article from: The Australian

TODDLERS in daycare should be given early career counselling, Principals Australia has told the committee drawing up the nation's first childcare curriculum.

The call comes as the state and territory children's commissioners caution against pushing academic-based teaching on children still in nappies.

And a leading childcare operator insists it is "crazy stuff" to start telling pre-schoolers about their career options.

Kate Castine, who runs the Principals Australia career education project on behalf of the federal Department of Education, Employment and Workplace Relations, is calling for "career development concepts" to be included in the new curriculum to be introduced nationally by July 1.

Her concern is that little children rarely think beyond what their parents and relatives do for a living.

"The argument that children should be exposed to career development concepts at an early age has been endorsed by current worldwide research," she wrote in comments posted on the department's official online forum, seeking feedback on the latest draft of the "early-learning framework".

"Reference to career development competencies needs to be explicit so teachers understand its importance."

Ms Castine said research showed students as young as six could identify what they wanted to do when they grew up.

"They identify very, very limited careers, usually associated with their family," she told The Weekend Australian. "That makes quite good sense but what needs to happen is that children who are very young need to identify there's a whole range of possible careers ... and not just what they see at home."

Ms Castine said childcare workers could casually canvass career options with children while watching a film, playing, or on an excursion.

"If they go on an excursion on a bus, you can talk about how we need people to drive the bus, or you can go to the museum and talk about scientists. It broadens their thinking at a young age."

"It's bad enough that kids in years 11 and 12 have to choose a career. How on earth can you get a four-year-old to think about what they'll be doing in 20 years' time?"

But Ms Castine said career education needed to start early. "If they don't start considering other careers until high school, there's less possibility they're going to consider the whole range," she said.

The federal Government's plan for a national curriculum -- a prerequisite for giving all pre-schoolers 15 hours of free care each week from 2013 -- has sparked squabbling between academics, bureaucrats, childcare workers and parents.

Criticism of its politically correct jargon forced a rewrite of the original draft, released last November, and now the authors are working on a third version.

The nation's children's commissioners -- state government agencies charged with safeguarding the rights of children -- have warned against an "academic" curriculum for babies, toddlers and pre-schoolers.

"Care needs to be taken that we are not creating additional years of school for our youngest children through a stringent academic-based way of teaching," the commissioners from NSW, Queensland, Tasmania, Western Australia and the ACT say in a submission.
Posted by Louise at 11:29 No comments: