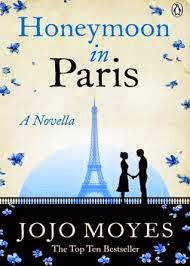 I can't quite remember how I learned that my library had an audiobook version of Honeymoon in Paris, but very soon after I had borrowed it and planned to listen to it while driving back home from Sydney. Never mind that Honeymoon in Paris is a prequel to a book that I haven't read (or really heard of) The Girl You Left Behind. I had a notion that Jo Joy Moyes writes romance/chick lit neither of which are my ususal reading fare, but if you stick a big Eiffel Tower on the cover of pretty much anything then I'll have a look at it.

Honeymoon in Paris is two intertwined stories of honeymooning couples separated in time. Sophie and Edouard are French newlyweds in 1912, while 90 years later in 2002 British newlyweds Liv and David make their way to Paris for their honeymoon. Both marriages have their own teething problems, and both couples their own insecurities.

I did enjoy Honeymoon in Paris, despite my reservations. The 2 1/2 hours of audio CD was a perfect diversion for my drive home. The Parisian setting naturally enough was wonderful. The story starts atop the Eiffel Tower, and takes in the Musee d'Orsay, rue Soufflot, Pont des Arts and the chocolates of Patrick Roger. Naturally I am familiar with all of these.

The narration was problematic at times, they appear to have used two native English speaking actors for the voices, which is fine for Liv who speaks in English with occasional attempts at French.


Even when she employs her best French accent, the waiters still invariably answer in English.


Oh haven't we all been there?

But Sophie's chapters are done with an outrageous French accent, which is often quite patchy. The accent did become a distraction at times. Still Honeymoon in Paris made a pleasant change from the loud 70s music that often accompanies me on long distance driving. I may just take a look at The Girl You Left Behind sometime.

Labels: Audio Books, Books on France, Books You've Never Heard Of But Just Have to Read, Dreaming of France, Paris

Yes, publishers seem to have gotten the message that a big honkin' Eiffel Tower on the cover sells books. I have a ridiculous five such books sitting in my TBR.

I'm sure Paris in the title, and/or an Eiffel Tower on the cover adds thousands more sales. If this was titled Honeymoon in Anywhere Else, I would never have listened to it.

That Eiffel tower certainly is a draw, especially the Eiffel tower! I have a friend whose last name is Paris; there's no end of Paris themed gifts I can buy in American stores.
I've only read one book by JoJo Moyes but quite liked it, the very popular Me Before You. As luck would have it, it's being made into a movie even as I write this! For the record, here's my take on that one- http://chapter1-take1.blogspot.com/2013/07/me-before-you-by-jojo-moyes-my-take-on.html

Thanks for the review. Sounds interesting!

I did not know about this one. I have read one of her other ones and enjoyed it.

Louise, Thank you. As soon as I saw your post, I remembered that the library had notified me that a digital download was waiting for me and guess which book it was. Honeymoon in Paris. I quickly went to the library website to download it. Like magic, it's on my phone. I'm looking forward to reading it while I go bicycle at the gym. Thanks for playing along with Dreaming of France today. Here’s my Dreaming of France meme