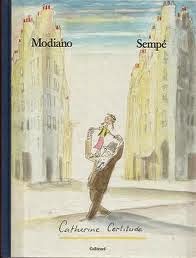 It's not very often you learn that the current Nobel Laureate for Literature has written a children's book. I was pleased to hear of Frenchman Patrick Modiano's Nobel win last year- even though I hadn't heard of him before. It's always nice to learn of another French writer. I was even more excited to find that he had written a children's book, and I preordered it for what was to be a March delivery, but it arrived in January, and very soon I was reading it. I was too intrigued, a story written by a Nobel Laureate, and illustrated by the very famous Sempé.

Catherine Certitude grew up in Paris, but is now an adult living in New York, reminiscing about her Parisian childhood. Catherine lives with her father at his business.

We lived above a kind of shop on Hauteville Street, with a steel shutter that Papa rolled down every evening at seven.

In the beginning, I envied my classmates who didn't wear glasses. Everything was simple for them. But as I though about it, I realised I had the advantage of living in two different worlds, depending on whether I was wearing my glasses or not. And the world of dance wasn't just real life, but a world where you jumped or did entrechats instead of just walking. It was a dream world, like the soft, blurry one I saw without my glasses.


It is a very odd book. I read it through twice, back to back. I'm not sure that I still got it really. Catherine's concerns and perspective are rather adult.


We always stay the same, and the people we have been in the past go on living until the end of time. So there will always be a little girl called Catherine Certitude, who is still walking with her father through the streets of the 10th arrondissement of Paris.


I'm not sure what I'd think of this book if I read it as a child. It's not surprising that a Nobel Laureate should write a charming but rather serious children's book I guess.


Other Nobel Laureates to have written children's books include Toni Morrison, Selma Lagerlof and Rudyard Kipling. While googling about I found this great page loaded with the books Nobel Laureates liked when they were kids. They sure were some geeky kids.

Labels: Books on France, Books You've Never Heard Of But Just Have to Read, Dreaming of France, In Translation, Paris

I have to admit I had NO idea Modiano wrote a children book, the 2 don't seem to fit together in my mind.be sure to link your review with mr linky

I have never heard of him.

PS my camera is a Sony RX 100M3 and it does all the settings. It is am amazing camera. I bought it before the trip. I just wish I had time to play with it before leaving.

Louise, I'll admit to feeling this way after I read many French books! Good find on the children's book. Maybe we should read it to some actual children and see what they get out of it! Thanks for playing along with Dreaming of France. Here’s my Dreaming of France meme

Sounds utterly charming in a very French sort of way.

I read one of his grownup books last year and it was odd-ish, too.

My rep told me an interesting snippet about this book...but I cant for the life of me remember it right now!

I've ordered one of his grownup books, so will be able to compare.

Brona- you have to remember! Or check with the rep..