The Sky So Heavy 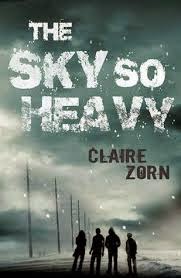 I do like a bit of post apocalyptic lit from time to time. It's not a genre I want to wallow in, but they're often a great page-turning read, whether meant for adults, such as The Road (see my review), or On the Beach, or any number of YA titles, with possibly the most obvious ties to John Marsden's Tomorrow, When the War Began series. Claire Zorn references Joseph Conrad's Heart of Darkness a number of times within The Sky So Heavy- I do wish that I had read it.

Claire Zorn's debut novel The Sky So Heavy was shortlisted for the CBCA Book of the Year Older Readers last year, and went on to be a CBCA Honour Book. And for a while it was everywhere, of course I wanted to read it, I just needed the opportunity. Thankfully that arose recently. Perhaps if I'd known that it would only take me a day or two to read I could have squeezed it in sooner.

The Sky So Heavy is firmly set in Australia. Findlay Heath is a 17 year old schoolboy in the Blue Mountains west of Sydney, with schoolboy concerns- assignments, his parents and whether Lucy will talk to him again, but all that is about to change, when two unnamed countries to the north start lobbing nuclear weapons at each other and the world falls rather quickly into a nuclear winter.

I never like it when writers are coy about countries involved in a fictional war. Just name someone, or make up a new country if you don't want to pick a current one. It's especially odd when the Australian setting is so very real- the lower Blue Mountains, and Sydney are described in close and accurate detail. There is quite a bit of action though, right from the start.

There are two things I know right now: one is that a guy is holding a gun to my head, the other is that I don't want to die.


While there is a great first person story for Fin, his family and his friends, there are also many broader themes- nuclear war naturally enough, conservation and global warming. There are more political slants, and we can definitely see some parallels with our current asylum seeker debates with segregation of the population.

It's funny how without something as simple as electricity it was completely useless- just a gaping, blank stare of black. Without electricity our house was a box of useless bits of moulded plastic and wiring.


You can hear an audio review on RN Books and Arts Daily from 2014 (with some major spoilers it must be said). I'm definitely looking forward to reading more of Claire Zorn, her second book, The Protected is already out, and has already won the Victorian Premiers Literary Award 2015.  I'm sure it'll be on some more award lists this year.

I think we know who is lobbing nuclear weapons at each other. At least I'm pretty sure I could name one of them. Sadly.