The Incredible Here and Now 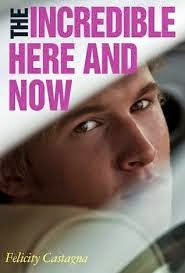 The Incredible Here and Now is a great read. Shortlisted for the CBCA Book of the Year 2014, and Winner of the Prime Minister's Literary Award 2014 I was expecting it to be, although I didn't know all that much about it going in. Which was possibly a good thing.

I've tried to read this book a couple of times. I borrowed it from the library at least once. But I didn't like the cover, and returned it unopened. I like the title, but something about the cover put me off. Now that I've read it, I can understand the cover, but that doesn't make me like the cover any more than I did before.

The Incredible Here and Now is more masculine than my usual reading fare. Fifteen year old Michael and his older brother Dom are growing up in Parramatta in Sydney's West. They live with their parents in an apartment block, and they like the usual things- cars, girls, having fun with their friends. Parramatta is present throughout the book, a character almost.

Some people say 'West' like it is something wrong, like ice-cream that fell in a gutter. I think West is like my brother's music, too much bass so you end up dancing like your body parts don't fit together and laughing all at the same time. That's what West is: shiny cars and loud things, people coming, people going- movement. Those who don't know any better, they come into the neighbourhood and lock their windows and drive on through, never stopping before they get somewhere else. But we know better.


Felicity Castagna has lived and worked (as a high school teacher amongst other things) in Western Sydney.

"The book draws on the voices of the diverse young boys I've met while teaching in high schools, workshops and tertiary institutions in Western Sydney,"she says.
"I also spend hours a day walking the streets of Parramatta with my young son, and I wanted the book to establish the city as a character as much as any of the other characters." Source.


No wonder she has such a sense of the area, such an appreciation of the history, and such a familiarity with school yard tribes.

Mrs Morrsion, she looks up and drops her hands to her sides. I can already see that she's giving up. She knows we aren't going to be reading any Shakespeare and pretending like it means something today.


Told in very short chapters, each a mere 1-4 pages, The Incredible Here and Now is a very fast read. But it is not without substance, it is packed with it. It is a remarkable evocation of place, urban renewal, a consideration of racial tensions and the rhythms and stresses of the lives of young men.

Because we can't get into One World Bar, because they won't let us go dancing at The Roxy, because the cafés are filled with too-old people, because the parks are filled with dodgy strangers, because we've already seen all the movies at Greater Union and Westfield is shut at night, because of all of this, the McDonald's parking lot is the centre of our night-time universe, at least for now.

Like you I haven't picked up this book becasue of the cover, but I figured there had to be something good going on inside thanks to all it's shortlisting and awards.

Covers can be a quick decision maker for me. This would have been a no, too, I think, based strictly on the cover.

Funny - the cover doesn't do it for me either but your review makes me think this is a book I would really enjoy - thanks for that!