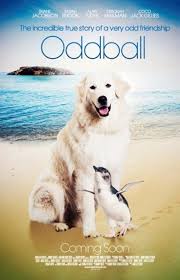 I hadn't heard a lot about Oddball before we went to see it the other day. But I knew it was about a cute dog and some even cuter fairy penguins. I knew that it was based on a true story. And what a wonderful story it is.

Oddball tells the slightly modified story of how an unconventional free-range chicken farmer saved a penguin colony from foxes. The fairy penguin colony on Middle Island at Warrnambool in Victoria had been depleted nearly to extinction by foxes who had learned to cross to the island- either by walking over at low tide or even swimming over. Baiting wasn't working, neither was trying to shoot the foxes.

Swampy Marsh used Maremmas on his chicken farm to protect his flock from foxes, so when he heard about the plight of the penguins he knew that his protective dogs could work wonders, and thankfully they did.

Of course there are other plot lines in the movie, some of which work better than others, but I'm really glad I went to see it. Shane Jacobson known to many from his sterling work in Kenny is endearing as Swampy. It took me a while to recognise Frank Woodley (yes I was just talking about him the other day as an author) as the dog catcher- he does sport one of the most unflattering hair cuts ever known. Naturally the dogs and the penguins steal the show. Warrnambool comes off fairly well too, with lots of atmospheric coastal shots, and I'm sure the movie will do great things for tourism there. Thankfully lots of Australians are heading out to see Oddball this school holidays.


Yes the movie is a little bit hokey. And it's a bit predictable. But it's sweet, and uplifting, and it's important. There aren't all that many good news stories on the conservation front. Polar bears are starving. The last male Northern White Rhino will die in the next few years. Tasmanian Devils are under threat from the devastating Devil Facial Tumour Disease.

But with this great program, just by putting a few dogs on an island to guard the penguins, that penguin population is making an incredible recovery. Sensibly there is a pozible campaign to raise money to train the next generation of Maremma dogs to stand watch over the penguins of Middle Island. Perhaps this is exactly what the Sydney penguin colony needs too?
Posted by Louise at 08:19

this is a fun list. Thank you for sharing-my name my come up as my spouses as I am on his computer-my computer has a bug as they say-actually a worm-it is an Apple and it is rotten to the core. Thank you for the well wishes. Broken arm and elbow so no riding for three months. aghhh