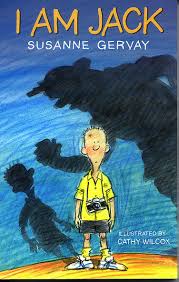 I've been meaning to read I am Jack for some time now, and was pleased to have the chance recently. I think I actually found out about the book because of the theatrical adaptation by Monkey Baa, Australia's best theatrical company for young audiences. I have already seen their productions of Thursday's Child and Pete the Sheep.

I Am Jack, the book, was written back in 2000, and the stage adaptation has been touring since 2008- and is still touring- I saw it a few weeks ago. The Australian tour continues until September 2015, and then the production will be touring America in October and November 2015.

Susanne Gervay wrote I Am Jack after her own son Jack was bullied as a child. Jack is 11 years old. He lives with his mother and sister in a third story flat above a fruit and veg shop. Jack's Mum works long hours at the local supermarket to make ends meet, and her new partner Rob stays 4 nights a week.

Jack is being bullied at school by the thuggish George Hamel. George starts calling Jack Bum Head. Soon pretty much all of the kids are calling Jack Bum Head too. Jack's world falls in on itself. His friends won't play with him any more. He's lonely and the school playground has become a minefield.  Jack takes refuge in the school library at lunchtime. He tries to talk to his mother but she is always busy and he doesn't know what else to do.

I wanted to tell Mr Angelou why I didn't want to go into the change rooms, why I was late, why my school trousers were torn, why I missed school, why I didn't answer any questions in class .... I couldn't. I feel breathless. It really hurt when they called Mum names. When they said my father left because of me. And I just took it, like a coward.


It's probably no surprise that Jack does overcome his difficulties with George Hamel by the end of the book. His bargain loving Nanna reminds him

'You know you're never alone when you have people who love you.'


and Jack releases the hold George has over him.

It makes George Hamel seem stupid. It makes the kids who followed him seem like that too. It makes me wonder why I let them bully me.


Bullying in schools has long been an important topic, at least one in four Australian children are bullied at some time, and the advent of cyber bullying has made it even easier. The Australian government has a successful Bullying No Way! website.

Hear Susanne Gervay being interviewed last year on Radio National about the fourth and final Jack book, Being Jack.

Bullying is a huge topic at our schools, too.

Of course we see it with grownups, too. Wish there was a push against grownup bullying.