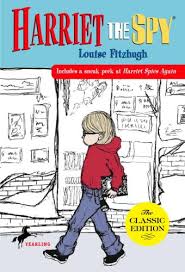 I’m very excited to have read Harriet the Spy at long last, it’s been on my TBR for so so long. Particularly as it comes highly recommended by Lisa Simpson in the classic episode from Series 9, Lisa The Simpson.


And please don't deprive yourself of wonderful books like To Kill a Mockingbird, Harriet the Spy and Yertle the Turtle- possibly the best book ever written on the subject of turtle stacking.


An essential episode that has another favourite scene.


Yes I have watched more of The Simpsons than is good for me over the years. But now I've finally read that trio of books. We always have preconceived notions of books that are quite famous and Harriet was no exception.
I wasn’t expecting Harriet to be quite so wealthy for a start. The Welsch’s have two servants - Ole Golly, Harriet’s nanny I suppose although referred to as her nurse, and Cook. Ole Golly likes to quote the classics- Dostoevsky, Wordsworth, Henry James. The Welsch’s have a library and a rather lavish lifestyle- Harriet’s parents are always going to parties and dinners in tuxedos and dresses that sparkle in the light. Harriet is left at home with Ole Golly.

Ole Golly entertained herself usually on nights like this by making some new recipe, like Lobster Thermidor or choucroute garnie, anything that neither she nor Harriet had tasted before.

Harriet is 11 years old and has been scribbling her spying observations in notebooks since she was 8. She has set up a patrol of her neighbourhood and has her favourite residents and stops where she likes to conduct her spying activities each afternoon after school. She is rather a creature of habit and has taken a tomato sandwich to school every day for 5 years.

I really liked the first part of the book, where Harriet was jotting witty things in her notebook. There was a gentle humour. Although I was a bit surprised that the first part was so much about Ole Golly and her suitor. Her friendship with Sport would be unusual now I think. Sport seems relatively poor- he looks out for his writer father, does housework and shopping. It seems odd that they would go to the same school.

Although I'm glad to have finally read this rather iconic book, I feel sad that I didn't like Harriet the Spy more than I did. I really liked Book One, and I know that I would have loved it if I'd found it at the right age. I'm sure I would have taken up a notebook and begun spying activities. I don't quite know what to think of the rest. I really didn't like the later parts of the book. It all gets a bit mean and preposterous after Harriet's notebook falls into the wrong hands. I have no history with Harriet, no broader cultural knowledge about where she fits into the scheme of things. I'm usually the first person to appreciate and like satire and sarcasm. I'm not sure that's what it was, or what it was for me.

I remember reading it a long time ago, and my overall thought was astonishment at the way Harriet treated her friends (in writing) and the subsequent way her friends treated her. It was painful to read, I thought.