The Brilliant World of Tom Gates 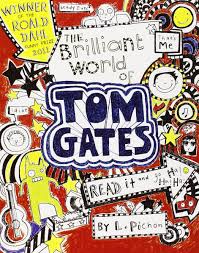 I wasn't planning to read this book this week, but sometimes books just require to be read. I used the opportunity of a brief stay with family to read my nephew's copy of The Brilliant World of Tom Gates. Tom Gates is a normal boy. He lives with his parents and his annoying older sister, Delia. He is in Year 5 at Oakfield School. Tom is usually late for school, and always likes to blame Delia. He likes to sit up the back of the class and doodle. He doesn't enjoy doing homework, there's just too much other stuff going on for him- playing with his friends, rehearsing with his band Dog Zombies and eating caramel wafers. 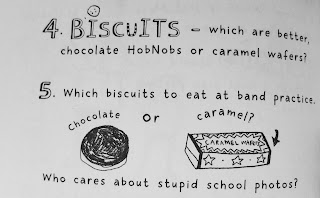 Told in illustrated diary format The Brilliant World of Tom Gates is full of stuff that is life for primary school aged children. The foibles of teachers and principals. Spelling tests. Homework. An excursion to the British Museum. All while trying to balance the competing demands of family, having fun and working out the best way to annoy your sister. 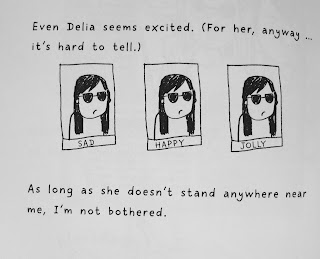 The Brilliant World of Tom Gates is a fun, funny, illustrated junior fiction book- one of the many fabulous recent books to help keep (mainly) boys reading. No it doesn't really tackle any big issues- apart from that old gem- hobnobs or caramel wafers? I've had many a hobnob in my time but never a caramel wafer. I can feel a taste test coming on....

And in rather typical style for me the Very Day After I read The Brilliant World of Tom Gates in part because it won The Roald Dahl Funny Prize in 2011, Michael Rosen announces that The Roald Dahl Funny Prize is no more. It is an ex-parrot. I did think it was odd to read yesterday that the prize was "on pause" until 2016 when it would be reintroduced for the centenary of Dahl celebrations.

Today The Guardian have made a quiz  based on The Roald Dahl Funny Prize. And a #thisbookisfunny hashtag has been created.

### Excellent news! Michael Rosen and Scholastic have announced a new prize for funny books. The Laugh Out Loud Book Awards. The Lollies Shortlist will be announced 11 February 2016, with the winners announcement on 4 July 2016.

P.S. Enquiring minds had to know. Caramel wafers have been trialled at the Wicker household. Master Wicker was very taken with them. I would rather a Hobnob- oh, that's not a bad idea...
Posted by Louise at 15:24

Hmmm...wonder why the award is "on pause"? Hope it does return. We have the Geisel prize here for funny. The winners are usually short picture books.

Oh The Roald Dahl Funny Prize is definitely no more. It had been "on pause", but it was announced a couple of days ago that it will not be returning. Sadly.