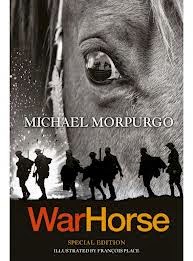 I enjoyed the opportunity to read War Horse recently. I knew that it was one of my 1001 books, and so I'd avoided the play (which was possibly dumb) and the movie, so that I could keep the experience of the story for my first reading of the book. I'm glad that I did, but I'll be keen to see the movie now, and hope to see the play sometime too.

I think it was a stroke of genius from Michael Morpurgo to tell a war story from the first person narrative of a horse. Joey becomes a trojan horse of sorts (pun definitely intended). We see the misery of war for the English, the Germans and the occupied French through Joey's eyes. I now love this current cover even more- the reflection of the line of soldiers in Joey's eye.

War Horse has a strong beginning, with young Joey, a foal, "not yet six months old, a gangling, leggy colt who had never been further than a few feet from his mother" sold at auction to a mean, drunk farmer. Joey bonds with Albert, the farmer's son. We feel rather sorry for Albert and his early life- with his miserable unhappy father, drunk every week on market day. One day Joey is sold to the army and sent to fight in the muddy fields of western France.

Morpurgo doesn't spare his young readers from the awful truth of war.

The wounded were everywhere- on stretchers, on crutches, in open ambulances, and etched on every man was the look of wretched misery and pain.


I had seen the same grey faces looking out from under their helmets somewhere before. All that was different were the uniforms - they were grey now with red piping, and the helmets were no longer round with a broad brim.


And yet Morpurgo gives us some hope, with a meeting of opposing forces in the desolation of No Man's Land, and the toss of a coin.


I enjoyed War Horse, and was very moved by some sections, and cried at times (tricky on a plane), but it wasn't the kick in the guts experience that I got from reading Private Peaceful (see my review)- one of my first Morpurgo reads which is possibly going to live on as my favourite. Still it's an appropriate month to read War Horse with the 100th anniversary commemorations of the start of WW1 this month, we do still live in a world that needs us to remember their stories.


War Horse was something of a sleeper hit. Originally published back in 1982, it came to prominence in 2007 when the National Theatre in Britain staged War Horse as a play with groundbreaking life-size puppets that went on to become a worldwide hit and made the book famous. A Spielberg movie version doesn't hurt either.

I saw the movie and liked it but didn't love it. I didn't realize there was a book.