Recently I had the good fortune to be able to attend another author event at my library. I do like to attend as many as I can, even if I don't intend to buy the books. I think it's great that our library is able to bring authors to a regional centre and I want to show my support, often the crowd is small but appreciative. 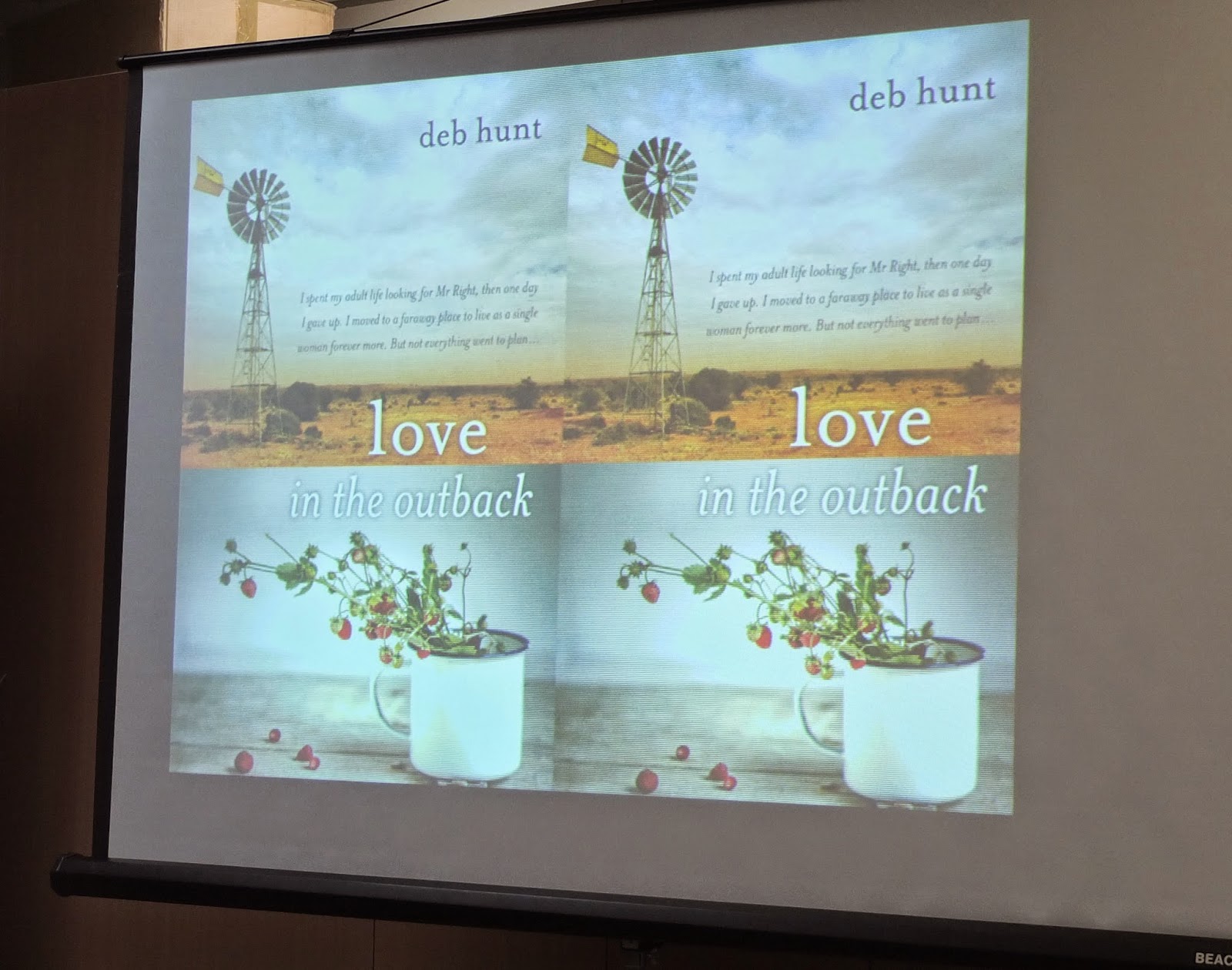 So I went along to see Deb Hunt speak about Love in the Outback. Not knowing anything about the book or the author. I figured it wasn't my sort of thing anyway, but I was very soon won over. Deb Hunt is a lively and engaging speaker, and told us of the background to her memoir, Love in the Outback.

Deb Hunt was 49, living in an idyllic 19th century stone cottage in the Gloucestershire village where she had grown up. But she was profoundly unhappy. Never married, with no children, and a "lifetime of failed relationships" behind her, Deb was working in what she knew was the wrong job- a job she tried to resign from on the first day of work!

One bleak English wintery day Deb goes online to find a job in Australia, she gets the job, and finds herself on the way to Australia a mere three weeks later. Deb got a job as the Communications Manager for the Royal Flying Doctor Service, that most iconic of Australian outback medical services. Her job takes her to remote Broken Hill, a place where the tyranny of distance is still obvious.

Broken Hill is still a frontier kind of place. BHP began there, and the fight for workers rights. It is a place of plagues, desert and rain. Deb was able to have chooks for the first time in her life, and grow more veggies than she could back in England. Deb settles into life in the outback, and is soon enveloped in the wonderful community that remote places can offer.

She is not looking for love when she meets the man she dubs Captain Considerate, the CEO of RFDS at the time. Captain Considerate has a rather incredible back story, badly injured in a helicopter crash when he was only 21. CC was a passenger in a helicopter that crashed in a remote spot, and it was 12 hours before they were found, after his pilot died of his injuries during the night. Extraordinary to think that that young man would then train as a pilot and make his career of it.


Love in the Outback tells the tale of this meeting of opposites. She a left wing vegetarian who likes the theatre, and he a carnivorous liberal. I'm sure by now you've worked out that I bought a copy, and have added it to my rather monstrous TBR.

You don't just have to take my word for what a fabulous tale this is, you can hear Deb Hunt speak about Love in the Outback on RN's Life Matters. Deb blogs at strawberriesinthedessert, and it's fascinating to see her turn the mirror on simple pleasures in Orange.
Posted by Louise at 11:53

She lives in my suburb, so she has popped into work quite a few times to sign books :-)

I chatted with her at our local school fete one day. She had a stand, signing books & always gracious and bubbly.

She also has a great blog called Strawberries in the field or something like that.

How wonderful that you've met her like that Brona- I'm getting more and more jealous of your job you know...

Thanks for the tip about her blog, I'll add a link.

It has been too long since I've seen an author! Love this author's story.

I hope you get to see an author soon Deb. This author does have a wonderful story.