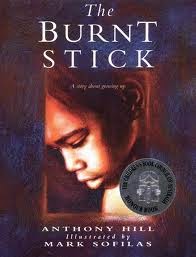 I came across this book title on the 50 Australian Books to Read Before You Die list last week. I'd heard of most of those books before of course, but there were a few notable exceptions. The Burnt Stick was one of those 50, and for some reason I was rather captivated by this title. I checked that my library had it- it did, and a day or so later it was home with me. At a mere 52 pages it was easy to sneak it in to my really quite overcrowded, and always over-optimistic reading schedule, and I'm very glad that I did.

The Burnt Stick is lovely, warm book that tells the chilling story of forced removal of children in 20th century Australia, now called The Stolen Generations. This was official government policy of the time and lighter skinned Aboriginal children were removed from their families with the aim of bringing them up in the way of the white community. I'd like to think that this was perhaps done with paternalistic yet altruistic intentions, but I don't really think that it was. This practice occurred up until the 1960s, I was quite shocked a few years ago to realise this, and that if my family had been different then I too could have been removed from my parents at any time.

John Jagamarra is living a simple, traditional life with his mother at a camp near a remote inland cattle property. John doesn't know who his father was, a white man, a traveller.

But it did not matter all that much. Within the camp John felt membership of a larger family, each one of whom looked upon him as part of their own. There were ties of blood and country through his mother and grandmother and his cousins.


John Jagamarra has light skin and is under threat from being taken away by welfare to be brought up far away at the Pearl Bay Mission.

It was felt to be best if those children with the light-coloured skin were sent to be taught in the white man's way.


The Burnt Stick was written by Canberra's Anthony Hill, and based on a true story told to him by an Aboriginal man who had been taken away from his mother as a young child. It highlights the forced removal of the children, and the rather incredible attitudes of the times.

It's great that The Burnt Stick is still in print. I'm sure that its inclusion in the 50 Australian Books to Read Before You Die will encourage others to seek it out like I did. It's important that Australian children still know these stories as the effects of these policies are still alive in our community.

Mark Sofilas provides lovely charcoal illustrations that manage to be somber and moving at the same time. 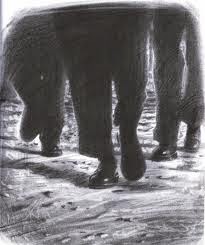 I hadn't heard of Mark before either. He is Australian, but now lives in the UK and has moved more towards oil painting.
Posted by Louise at 09:47