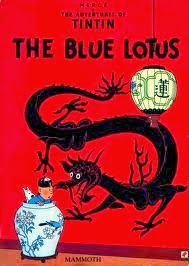 Is it wrong to admit to being confused by a comic book? I want to like Tintin I really do. But I didn't get it as a kid, and it seems I don't really get it as an adult. I do remember reading Tintins at my childhood library, and I remember not falling under their thrall at that stage. I'm trying again as an adult. Back in 2011 I read the first ever Tintin, Tintin in the Land of the Soviets. I read a couple of the Tintin books that served as the basis for the recent movie, The Adventures of the Tintin- which I didn't mind.

Last year I read Hector and the Search for Happiness. Hector goes to China because he loved The Blue Lotus so much. I wasn't sure if I'd ever read it and borrowed it from my library recently. And then I didn't understand it enough to like it. Clearly the failing must be mine as 17, 000 French people voted it at #18/100 in Le Monde's Hundred Books of the Century. The only Herge title to make the list. Although the question they were asked was "Which books have stayed in your memory?",  not which books do you think were great. Perhaps because The Blue Lotus is still regarded as one of the most important of the Tintin books, the one where Herge hit his stride.

The Blue Lotus is the fifth of Tintin's adventures. Beginning in India soon after Cigars of the Pharaoh, Tintin is lured to Shanghai, and we start on a seemingly endless series of poisonings and kidnappings. I never really understood what was going on, or anyone's motivations. Perhaps my near complete lack of knowledge of Chinese-Japanese relations in the 1930s is a major failing, but then does your average 8 year old need to know that to appreciate the story? Interesting that it was politically sensitive at the time, and the Belgian Army said the book wasn't suitable for children. Herge said that his books were no longer solely aimed at children.

I did like the fakirs and opium dens though- I do find that there's generally a shortage of both in any children's book you pick up these days.

Labels: Books on France, Dreaming of France, In Translation

This review made me laugh. Of course, eight-year-olds need to be educated about opium dens. I haven't read the Tintin books. Sounds like I'll leave it for the French intellectuals. Thanks for playing along today. Here’s my Dreaming of France meme

I loved Tintin as a child. I too read and borrowed them from the local library. The European graphic novels (the PC term for comic book) that enjoyed most though were Asterix... and I think they also came from Belgium.

My son loved the Tintin books as a child….I guess I never wondered just what he was reading at the time….I was just captivated by the illustrations.

I never got Tintin either.

I was (am still, I think!) a Tintin lover. And I agree about opium dens - even the cigars of the pharaoh may need some explaining nowadays, sadly! ;-)