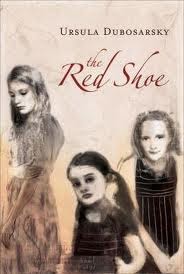 If you'd asked me a week ago if it was possible to combine Hans Christian Anderson, the Petrov Affair, the Sydney Morning Herald, polio and red shoes into an unsettling book about an Australian childhood I would have thought that the answer would have been no. But it's definitely a yes. And somehow it all works.

Matilda, Frances and Elizabeth are three sisters growing up on the outer edges of Sydney in the early 1950s. They live in what was really the semi-rural/suburban isolation of Palm Beach, before it became the millionaire's playground of today.

The house next door had two storeys and a long wide front garden and a side driveway for cars. It's like a film star's house, their mother said, but nobody lived there, not even a film star, because it was a holiday home. Lots of the houses in the streets around them were like that. In the summer people came in cars and had parties in the houses and trailed down to the beach. But the rest of the year the streets were empty as a ghost town. There were more trees than houses, more possums than people, their mother said. It's like living at the ends of the earth. said their mother, and in fact it was.


Their father was a soldier in the war, and is now often away working as a merchant seaman. The family are going through a difficult time. Matilda is bothered by her imaginary friend who lurks in the radio, Floreal, Frances has stopped speaking and Elizabeth is having a nervous breakdown. She's stopped going to school, and stays at home reading every word of the Sydney Morning Herald.

Elizabeth was not bored. For one thing, there was the newspaper. She had always liked reading the newspaper, but since her nervous breakdown she had begun to read every single word, really every word. All the conflicts, crimes, unknown names, excitements and miseries, all those numbers and letters and reports of rain and snow. She read the legal reports and the obituaries and the medical notices and the houses for sale and the employment columns and the entertainments. Everything seemed to fit into a mysterious and beautiful pattern, connected like fine strands of coloured cotton strung across each other to form curving parabolas.


Dubosarsky peppers the text with columns from the Herald which sometimes have an obvious link to the story, and other times I struggled to see the relevance. There is an interesting reading guide where Ursula describes her original inspiration for the story- hearing people on the radio reflecting after the news of the death of Mrs Evdokia Petrov.

The cover blurb tells us The Red Shoe is "Punctuated by the headlines of the time, it shows with unsettling clarity how the large events of the world can impinge on ordinary lives." It does do that, but it is much more a domestic story than I was expecting based on that quote.

The back cover blurb has an astonishing quote from Sonya Hartnett.

'Reading Ursuala Dubosarsky's novels is like walking through a dream: you know you're not allowed to stay, but you don't want to leave it, and when it's gone you can't stop thinking about it. In this beautiful story, Dubosarsky proves yet again that she is the most graceful, most original writer for young people in Australia- probably in the world.'


High praise indeed from one of our most original writers, I have great respect for Sonya Hartnett. The Red Shoe was my first book by Urusla Dubosarsky. It won't be my last.

This book was another reminder to me of the Big Amazing World of Children's Books out there, most of which I've never even heard of.