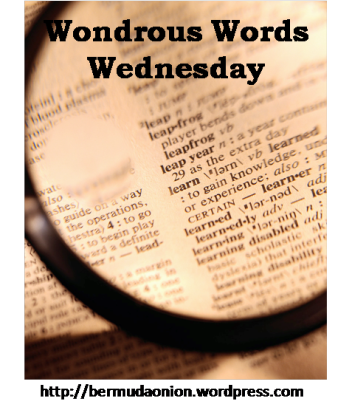 It's been a while since I've participated in Wondrous Words Wednesday. Not that I haven't been finding new words, just been a bit lazy with getting posts together. I should have kept it up because when I came across demesne I knew I'd seen it before, and suspected that I'd even put it in a WWW post, and I had. My recent reading of The Call of the Wild offered up many great new, first time, words.

Of, relating to, or occurring in winter.

Buck did not read the newspapers, or he would have known that trouble was brewing not alone for himself, but for every tidewater dog, strong of muscle with warm, long hair, from Puget Sound to San Diego.

Buck heard them chaffering, saw the money pass between the man and the Government agent, and knew that the Scotch half-breed and the mail-train drivers were passing out of his life on the heels of Perrault and François and the others who had gone before.

i) To bargain or haggle.
ii) Chiefly British. To bandy words; to engage in small talk.

He had learned well the law of club and fang, and he never forwent an advantage or drew back from a foe he had started on the way to Death.

Past tense of forgo.

At a particularly bad spot where a ledge of barely submerged rocks jutted out into the river, Hans cast off the rope, and, while Thornton poled the boat out into the stream, ran down the bank with the end in his hand to snub the boat when it had cleared the ledge.

i) To ignore of behave coldly toward; slight
ii) To dismiss, turn down, or frustrate the expectations of
iii) Nautical
a) To check the movement of (a rope or cable running out) by turning it quickly about a post or cleat.
b) To secure (a vessel, for example) in this manner
iv) To stub out (a cigarette, for example)

Back and forth the bull tossed his great palmated antlers, branching to fourteen points and embracing seven feet within the tips.

i) Having a shape similar to that of a hand with the fingers extended: palmate antlers; palmate coral.
ii) Botany. Having three or more veins, leaflets, or lobes radiating from one point; digitate: a palmate leaf.
iii) Zoology. Having webbed toes, as the feet of many water birds.

There is a patience of the wild- dogged, tireless, persistent as life itself- that holds motionless for endless hours the spider in its web, the snake in its coils, the panther in its ambuscade; this patience belongs peculiarly to life when it hunts its living food; and it belonged to Buck as he clung to the flank of the herd, retarding its march, irritating the young bulls, worrying the cows with their half-grown calves, and driving the wounded bull mad with helpless rage.

All definitions from thefreedictionary.com
Posted by Louise at 10:06

Whoa! You've made up for lost time! Lots of words today - thanks for including some pictures. My favorites are brumal and the alternative meanings of snub.

Lots of new words -- I read Call of the Wild once, I think I should have made better use of my dictionary!

Your question about "salutatorian" on my blog this weekend prompted my WWW post today!

Good to see you back with the word lovers. I can see you've been saving up a bundle.

Who knew there were so many great words in The Call of the Wild? The only one I knew was tidewater and I knew that because I used to live in the Tidewater area of Virginia.

I love Wondrous Words. It reminds me to write down those wonderful new words as I'm reading.