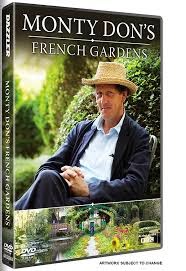 I'd never heard of Monty Don before this delightful series started playing on our ABC recently. Monty is a BBC gardening presenter who lived in France for 6 months as a young man, and has loved France ever since. Monty has a respectable handle on the French language, and seems to have mastered French scarf tying. He tootles about France in a 2CV in this lovely 3 part series.


Episode one, Gardens of Power and Passion, reminds us that those powerful human emotions of passion, power, ambition and disgrace can achieve many things, even making gardens.

Monty visits several of the spectacularly grand classic French gardens to show us how gardens can be displays of wealth,power and position. One of the classic chateaux of the Loire Valley, Chenonceau was built by Henri II and given to his mistress Diane de Poitiers. When people saw the garden they didn't just admire the garden, they admired her.

The Monty takes us to the stunning Chateau Vaux le Vicomte. A 17th century masterpiece by the famed landscape architect, Andre Le Notre who used 18,000 men to work on the garden, creating engineering feats- diverting rivers and building gravity fed fountains. Louis XIV was so annoyed that Nicolas Fouquet had a better garden than him that he arrested him. Louis XIV was of course to use Le Notre's considerable talents to create the ultimate in grand French gardens- Versailles, where no amount of excess was too much- new plants would be put in overnight so the king could wake to a new garden. 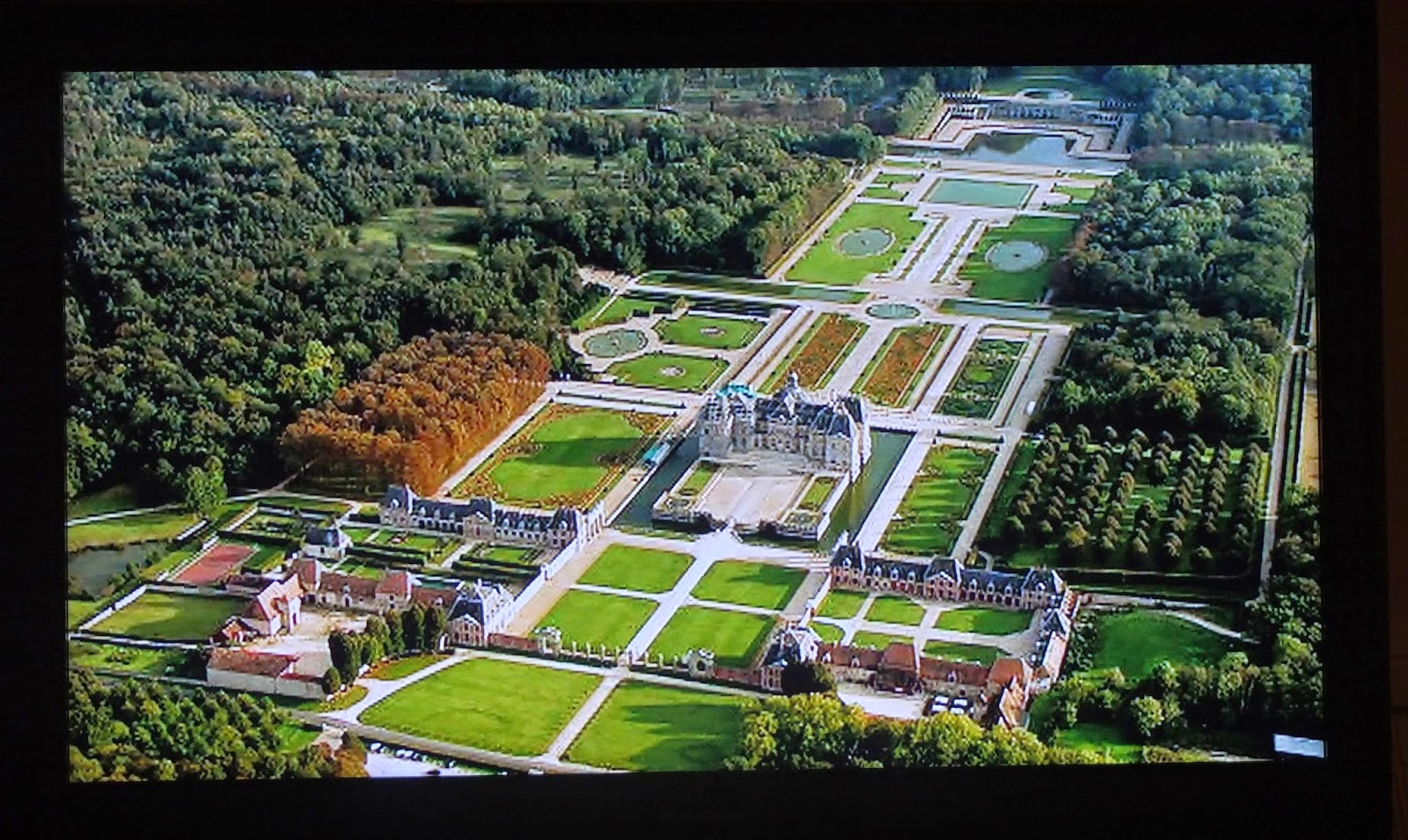 Monty visits other classic French gardens including Napoleon's residence Malmaison. Josephine was apparently obsessed with roses, she was Europe's first collector of roses, and Napoleon instructed his generals to bring back plants from their theatres of war. Apparently a rose is often the first flower that the French will put in their gardens. Monty also visits some more modern gardens including a rooftop garden at the flagship Hermes store in Paris. Paris has twice the population density of London, yet she never ceases to surprise and delight us!

Episode 2, The Gourmet Garden, explores the history and the art of the potager, the French kitchen garden. Potagers show us man's control of nature and food production, and highlights the French love of order and control. Monty believes this tradition started with medieval monasteries.

A third of French people still buy their produce from their wonderful open air markets, and a half of French people buy local produce. Importantly, the French spend more time eating and drinking than anyone else in the western world.Monty's choice of a 2CV takes on more significance as he tells us it was designed before the war to transport a farmer and their produce to market, without damaging the produce.

Monty explores the notion of terroir- that mystical combination of soil, climate and place developed and beloved by the French, which is at the heart of the French relationship to their food. Monty visits several potagers, from simple to unbelievably grand.

The extraordinary Chateau Villandry in the Loire Valley has the most famous potager in the world. Each year they raise 70,000 plants, and also buy about the same number. Sadly it's now all decorative, the food is grown to be viewed, not to be eaten. They do harvest the peppers and eggplants and give them to visitors. Incredibly the vast majority ends up on the compost heap. Which is such a dreadful waste. Monty bemoans that function and form have grown too far apart.

At Versailles the Potager du Roi is just as extravagant. And why not? Certainly the king should have had the best potager. It currently employs 10 permanent gardeners. It shows us a great demonstration of elaborate pruning favoured by the French, their espaliered trees. Understandably secateurs were a French invention.

"Each tree has to be understood."


Some of the fruit trees at Versailles date from the late18th century. Unlike Villandry, Versailles is a working garden, and harvested produce is sold at the garden gate.

Monty visits a Jardin Ouvrier (workers garden) in a poor area of Paris, an allotment style garden where the unemployed or retired can grow food for their own tables and appreciates the benign easy generosity of those who work allotments. Vegetables are grown separately from flowers.

Paysan, is an honourable state in France. Peasant culture was simply living off the land, that still remains something that the French practice and respect. All their food culture stems from the fact that you grow your food on the patch of land you have.


Monty tours regional France and shows us fascinating sights like onions growing in terraces of the Cevennes, looking more like rice paddies. 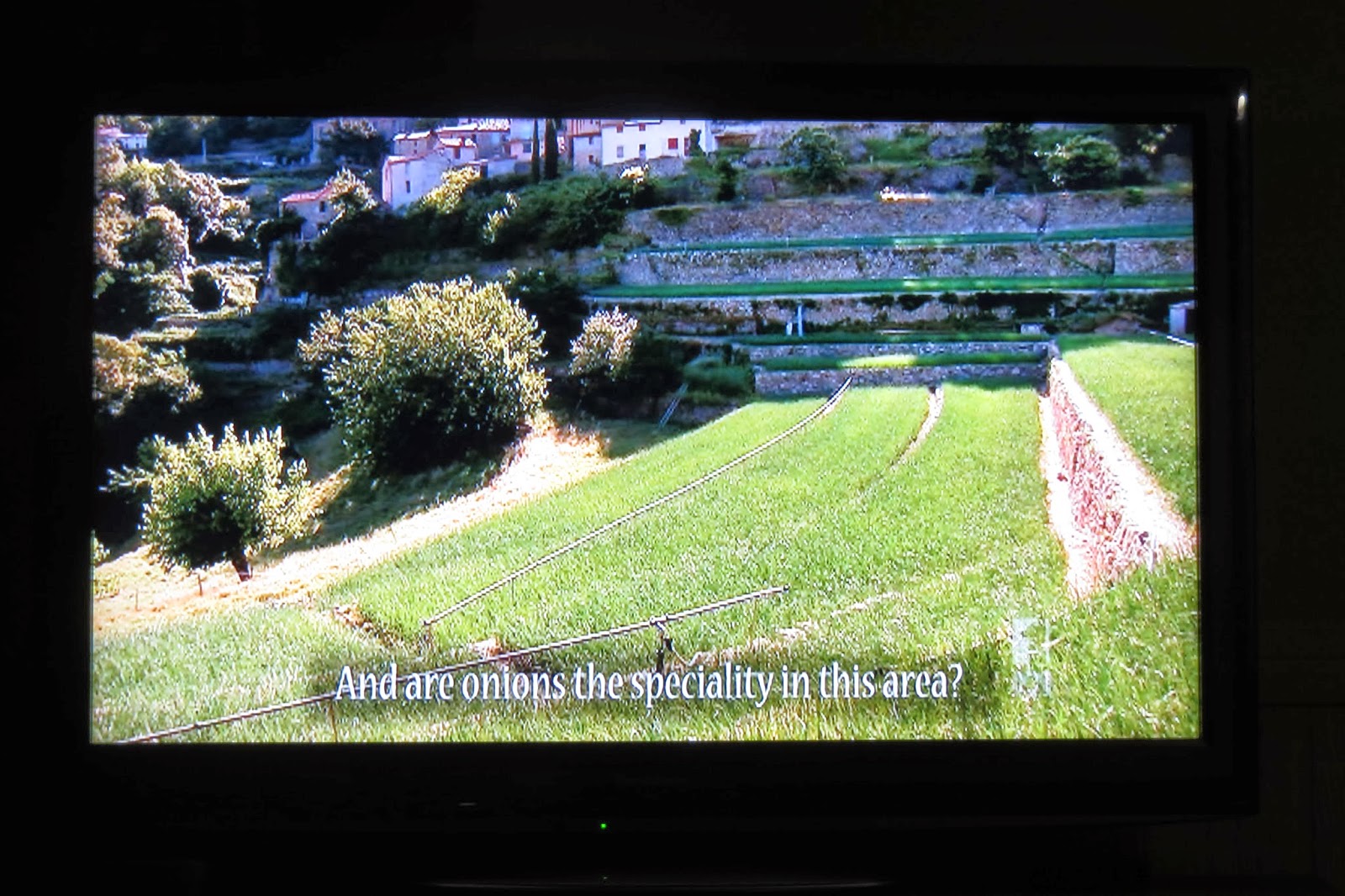 and how to harvest white asparagus in the Dordogne. 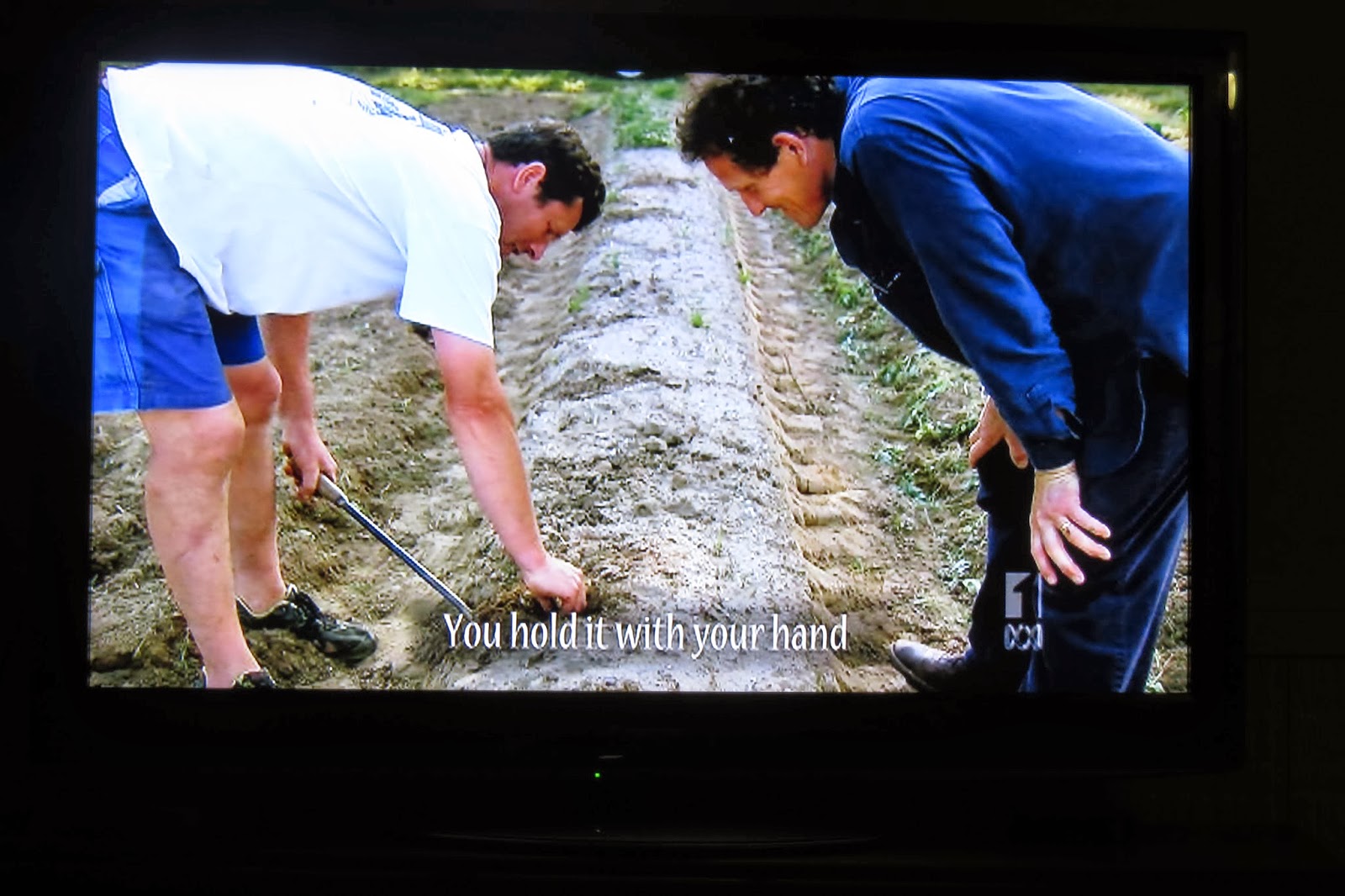 Episode 3, The Artistic Garden, shows us the gardens of great French artists and gardens considered as works of art themselves. Paris has always attracted artists and intellectuals- perhaps this explains my Parisian attraction?

Of course he starts with Cezanne and Monet those most famous of French impressionist painters "attempting to capture the essence of a single moment in their canvases". Monty visits the Orangerie initially to see his large panels hung there, before heading to the most famous of artistic gardens at Giverny. I hadn't heard before that Monet worked on a number of canvases simultaneously, moving around the garden as the light changed.

Monty is moved to grand thoughts in Cezanne's gardens in Aix-en- Provence.

For me a garden is home, it's life, childhood memories, dreams all bound up- you can't separate it.


He loves seeing the light and hearing the sounds as Cezanne would have heard them. He then takes us to France's first cubist garden. Monty then explores some modern concepts in art gardens- vertical gardens, using plants as living sculpture, or reinventing the elements of a traditional French formal garden for an elegant effect. It's a lovely exploration of gardens and art. 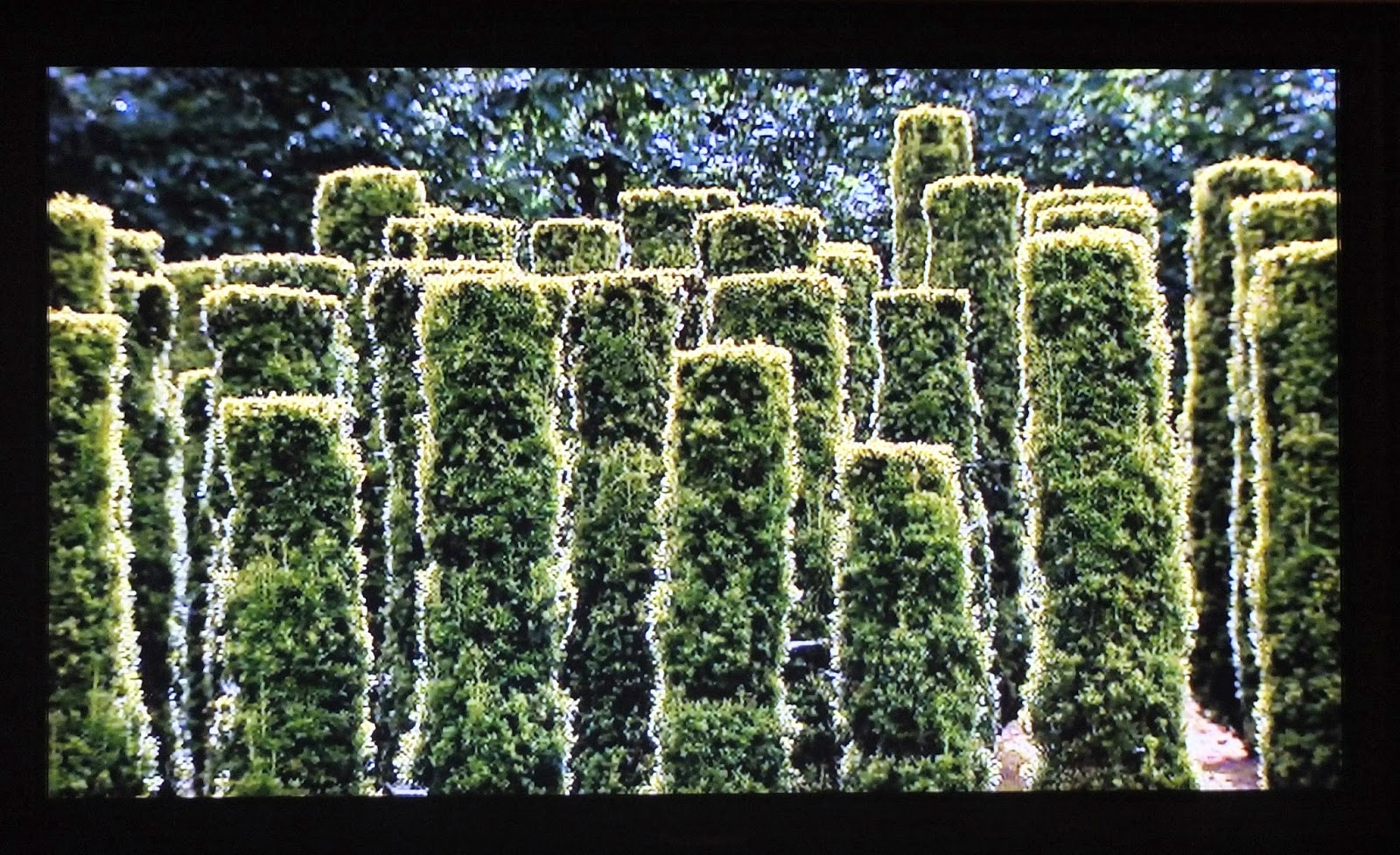 Monty Don's French Gardens is perfect for those of us Dreaming of France-whether you've been to France, and have been lucky enough to visit some of these beautiful places, or are daydreaming of a first trip to France.

Labels: Dreaming of France, on the tele, Paris

I really want to get to Vaux le Vicomte one day as its emblem (is that the word?) is a squirrel and apparently there are squirrel 'things' everywhere.

What a terrific post with great links too. I'm really hung up on that Hermes rooftop garden. I can't understand how a whole apple tree with its complex root system could grow on top of a building. These videos aren't on youtube, but Monty Don's Italian Gardens are, so I'll be hopeful that someday the French Gardens will be there.
Thanks for playing along. Here’s my Dreaming of France meme

The more I learn about the French (thank you, Louise, for this new info) the more I'm intrigued with the idea that my people were originally French. My mom always said her people were Italian, but when I studied her family more carefully, I learned the family name Franchini has origins in territory other than Italy.

I'll have to watch this. I've been to several of the gardens but without any real understanding of all I was seeing.

This sounds wonderful. I loved the French potagers. We visited Villandry. They told us that the food is eaten -- given away to the villagers. Maybe they changed their policy after this aired. Or maybe they lied to us.

My favorite potager was at Chauteau de Valmer--scaled to serve a family and a small market.

I'll keep an eye out for this. I hope they'll show it in the US.