My Life as an Alphabet 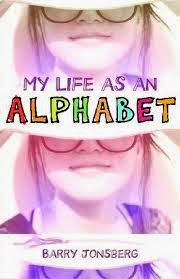 There are just so many books, it's really hard keeping up. I don't always remember where I heard about a particular book, but for this one I do. Lisa at ANZLitlovers mentioned it when she listed the finalists for the 2014 Victorian Premiers Literary Awards, and she said that it was popular with the kids at her school. My Life as an Alphabet went on to win the Young Adult Award and the Children's Peace Literature Award. I found it at my library recently, and wanted to read it so I snuck it into my busy schedule. I'm very glad that I did. It's a great read- managing to be both funny and moving.

My Life as an Alphabet is a funny, quirky book- a bit like a Rosie Project for the YA set. Although Candice Phee isn't searching for a mate like Don Tillman was. Candice is simply trying to help her family, and her small number of friends be happy. Candice's younger sister has died, and now she is an only child. Her parents haven't really dealt with the death, and both are getting by as well as they can in their own ways. There is an ongoing family rift with Rich Uncle Brian.

My family does not have enough laughter in it. All the laughter evaporated when my sister died.


My Life as an Alphabet is written as an extended response to a school assignment from Candice's English teacher, Miss Bamford. It is meant to be 26 paragraphs, but Candice extends it to 26 chapters. Conceits like that don't always work in fiction I think, but it works a treat here. It's a school project writ large. It's rather fascinating to see that Barry Jonsberg, an English teacher himself, borrowed the title from an assignment submitted by one of his students. He has created a unique and very funny first person voice in Candice- always one of my favourite voices to read.

Candice is an interesting, quirky character. She is on her second run through Dickens- it always annoys me when characters are better read than I am! She befriends the equally quirky Douglas Benson From Another Dimension, and worries about the religious musings of her fish, Earth-Pig Fish.

What if she believes that if she does die, she will be brought, in a fanfare of heavenly trumpets, to my bosom and live in eternal bliss when in fact she's almost certainly destined to be flushed down the toilet?

My Life as an Alphabet will be released in the US September 2014 as The Categorical Universe of Candice Phee. And I thought I'd discovered a sequel :-(. It's being adapted as a play touring to schools.

It's been a good year for new Australian authors for me so far- first Steven Herrick, then Ursula Dubosarsky and now Barry Jonsberg. I'm looking forward to reading more from all of them.
Posted by Louise at 10:34

Hi Louise, I saw this at the bookshop a while ago and thought about it for my niece - looks like it could be good for adults too. I really just wanted to pop in to let you know we've launched Paris in July for the 5th year now. I hope you'll join us. www.thyme-for-tea.blogspot.com