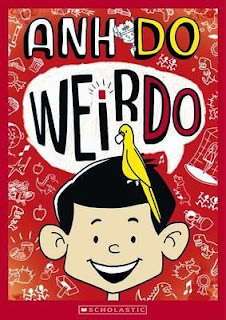 I first came across this book in the October 2013 issue of Good Reading magazine. I've been a subscriber of Good Reading for over 10 years, and it's still exciting when a new edition plops into the mail box. I've even won their subscriber draw- twice!

I generally trust their reviews. They're not afraid to give an unflattering review, or a low score. So when they praise a book, or give it 5 stars, then it's usually worth a look. Of course they review lots of books that I want to read every month. Way too many for me to actually read, although like every reader I suspect, my reading eyes are always bigger than my reading stomach. So, I always want to read most of these books. It's usually easier to pick out the ones where I think "No, that's not me." But some books you know you will meet very, very soon. WeirDo was one of those books. And so it came to pass this week.

I was excited to soon after find a copy of WeirDo in my local bookshop. It has such a cool red cover that I had to buy it straight away. And then you realise the cover is even cooler- it's one of those thick covers, with animated movement (apparently called a lenticular animated cover with motion technology!).

Weir Do is the new kid in school. Not surprisingly he dreads being the new kid anywhere. Weir as a name is ok. But Weir Do isn't. It's funny. This book is full of the fun stuff that kids of a certain age love- funny names, fart jokes, scabs and nits. Weir is a little bit weird, like most of us, but he just wants to fit in and make friends.

The pictures are funny too. Jules Faber is new to me, but he's not new to drawing, and takes the book to new places. WeirDo is apparently the first in what is to be a series of books featuring Weir, I will certainly be looking forward to reading more of them.

A couple of things bothered me as an adult reader though. Weir is young enough that he still does show and tell, but he is interested in girls, and quite fond of the 7th best looking girl at school. Really? And come on Anh kids in Australia do sport- they don't go to gym class.

Anh Do is an Australian comedian. He found further fame with his very successful memoir The Happiest Refugee (which I Still haven't read), which has also become a stage show (which I haven't seen either). I have managed to read the picture book version, The Little Refugee. It's easy to see where he got the inspiration for WeirDo.

Anh's got such an open, friendly face.
He's a likeable guy, just like Weir.
Posted by Louise at 08:25

We took the boys to see Ahn Do's live gig last year. We all laughed so much we had sore tummies for days after :-D

I had a quick flick through this book and categorised it in the Andy Griffiths basket.
Great for exactly the type of reader that you identified...but fortunately, both our boys are too old for this now and I didn't have to read it all the way through!

Oh I'd love to see him live, I'm sure that would be fabulous, and I'd be as sore as you were. You were quite right to put it in the Andy Griffiths basket, perhaps a bit younger.

Hasn't hit America yet, but I see it coming. Our basket? Diary of a Wimpy Kid, I think.