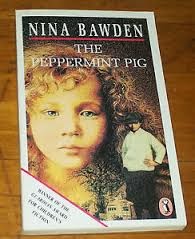 The Peppermint Pig has one of the best opening lines I've ever read.

Old Granny Greengrass had her finger chopped off in the butcher's when she was buying half a leg of lamb.


That's just fantastic. What kid doesn't want to read more about Old Granny Greengrass and her fingers? Sadly Old Granny Greengrass isn't much of a figure in the family story of The Peppermint Pig. The Greengrass family are living in London in the early years of the twentieth century. James, the father works as a coach painter, but has to leave his employment under rather odd circumstances. The four Greengrass children and their mother move to Norfolk to stay with family. There they take in Johnnie, the titular Peppermint Pig of the title. Johnnie was a runt, and sold off cheap by the milkman.

'Runt of the litter,' the milkman added. 'Too small for the sow to raise. He'd only get trampled on in the rush.'

"a pig has more brains than a dog, let me tell you."


But Johnnie isn't the main character of our story either. An intriguing slice of life, The Peppermint Pig gives us a great sense of life in Norfolk in 1910/11. Already historical fiction when written in the 1970s, we have a great glimpse of life in the pre-antibiotic era. The fear of sore throats when they could end a young life. Fever carts. Passing bells. Carbolic acid sheets and washes- although it seems it was also used as a medication. Nina Bawden uses such a wonderful vocabulary suitable for the time, and I love it when children's authors use words like slatternly.

The Peppermint Pig was quite an unknown entity for me. I'd heard of author Nina Bawden a little bit, she's most famous for one of her other children's books, Carrie's War, although it wasn't to win any particular prize on publication. The Peppermint Pig won the Guardian Children's Fiction Prize in 1976. Nina was a rather extraordinary woman, with the rather rare ability to write for children and adults- whilst she is most famous as a children's author, she was shortlisted for the Booker Prize in 1987 for Circles of Deceipt. Always one with strong political views, they helped shape her writing for both children and adults.

The initial impulse to write for children, she once explained, had come after she found herself depressed by the books her sons were reading, with their “wooden characters uninvolved in any reality I recognised. I think I wanted to give my children something that would encourage them to feel they could make a difference to what happened in the world.”


Nina Bawden often used family stories or personal experiences as the inspiration for her stories, or for added authenticity. Her own war time evacuation to Wales famously formed the basis for Carrie's War.

A great-grandfather on her mother's side was another skeleton, an "old tramp" who had taken to drink but still dropped in on the family from time to time. When Bawden put this character into The Peppermint Pig, her mother was furious, railing against the disgrace and against Nina's uncle, who had failed to keep the secret.