The Hound of the Baskervilles 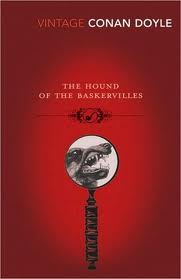 My first foray into Conan Doyle's Sherlock Holmes. He is famous, so famous. And now I can see why. This is a cracking read. Somehow, thankfully, I remain ignorant of the plots of most classic books. So they are always a pleasant surprise to me. The Hound of the Baskervilles was no different. I had a vague notion that it was about a big, nasty dog. And it is, but it is also about much more.

Sherlock Holmes is engaged to look into the mysterious death of Sir Charles Baskerville, by Baskerville's friend Dr Mortimer, and he is quickly informed of the curse of the Baskerville family from an old manuscript depicting the grisly death of Hugo Baskerville in 1742. There is a bit of preliminary detective work in London before the action moves down to the lonely Devonshire moors.

The Hound of the Baskervilles has an interesting structure. Narrated by Dr Watson, there are several changes in style and format. It starts with a typical narrative structure, later we have two chapters that are letters written by Watson to Holmes, and then Watson's diary entries. It is full of a wonderful and rich vocabulary which will give me ample fodder for several Wondrous Word posts I'm sure.

It's a great gothic story with some nice twists, and a wonderful menacing air. I was really quite surprised at how graphically poor Hugo's death is described. We get a wonderful peek into turn of the (20th) century life for the moderately well to do single man. That you can write notes on your shirtcuff as we would write them on our hand. That if you're stuck in a tricky place you can get a boy to bring you your simple wants such as bread and new collars for your shirts. That nouveau riches wasn't a term dreamed up for Lifestyles of the Rich and Famous in the 80s. And I've never come across a better description of my day job:

"We are coming now rather into the region of guesswork," said Dr Mortimer.

"Say, rather, into the region where we balance probabilities and choose the most likely. It is the scientific use of the imagination...."

Indeed Conan Doyle's inpsiration for Sherlock Holmes was to be found in Joseph Bell, Scottish surgeon, one of Doyle's lecturers at the University of Edinburgh, and personal surgeon to Queen Victoria when she was in Scotland (a fact apparently plundered in a recent Doctor Who episode- is there no snippet of history unplundered by that show? Or are there researchers out there trawling wikipedia day and night like the rest of us?). I was hoping that he would be the Bell of Bell's palsy, but that appears to be another Scottish surgeon from Edinburgh, Charles Bell. I suspect that they are likely to be related.

Conan Doyle appears to have been a fascinating man. Scottish doctor, author, activist, husband and father. He actually wrote in many other genres including poetry and historical fiction, which Ruth Rendell in her introduction to the Penguin says were never very readable, and now largely forgotten. He thought that Sherlock Holmes diverted his attention from his more serious works, so much so that he killed off Holmes in one story, but the public outcry was so large that he was brought back in for The Hound of the Baskervilles in 1901.

It never occured to me that a video would exist of Sir Arthur Conan Doyle!


Or that he would be such a passionate advocate of both scientific observation and psychic experiences! I love that he says that he never risks hallucinations. Now that's sound advice.

Conan Doyle wrote four novels and 56 short stories featuring Sherlock Holmes. I have a lovely Penguin Complete Edition and a few of the short stories loaded onto my phone, and now I can look forward to spending some more time with Sherlock Holmes. If it is all too much for you to read this rather short book in our hectic, modern world, then you could listen to this wonderful, funny, irreverent Digested Read summary by John Crace instead. Or do both, it's worth it.

I've never read a Sherlock Holmes book, but maybe this year will be the year, since I read my first Agatha Christie not too long ago. I'm glad to see you liked this.

I think you'd enjoy it Kathy. He was a bit before Agatha Christie of course, and it's definitely a story from another time, and world really. But it's very enjoyable, and Sherlock Holmes is still quite a pop culture reference. Certainly the BBC made a fantastic new series last year, with more episodes to come this year- the second one of which is to be The Hound of the Baskervilles. So it still has cultural relevance. And it's great to see where it came from. You'll certainly be learning a few words from Conan Doyle over the next few weeks :-). I'm very keen to read more. They may get a bit samey I suspect if you sat down to read all 60 in a row, but anything does that.

Thanks for this review - like Bermudaonion, I've never read a Sherlock Holmes book, wondering if they'd be too old fashioned or stuffy, but now I'll add it to my 'must read some day' list.

I, like Kathy, have never read a Sherlock Holmes book - my husband loves him :)

I'm happy to have read this book, too. It's also my first Sherlock Holmes. (I really wonder how I have missed so many fantastic reads.)

Nice review and thank you for sharing the little video of Doyle. (Makes you wonder who else is out there on video? Shakespeare? Plato?)