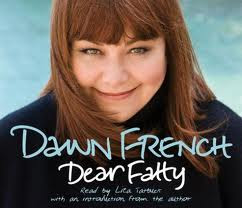 I was initially disappointed that Dawn didn't read this audiobook herself, but she does a brief introduction where she says that she felt she couldn't read it herself as it was too personal and difficult. Hmm, alright then. Hard to argue with that I guess. She chose a friend to read it, who actually does sound a bit like Dawn. And she does a good job of it.

An unusual memoir, written as a series of letter to friends and family (most often her father), and random folks like David Cassidy, his letter written by a smitten teenage Dawn. I do love an epistolary novel. I'm not sure that I've ever come across an epistolary memoir before, but Dawn makes this format her own on 6 wonderful CDs. She apparently received a 1.5 million pound advance for the book, which seem rather well deserved.

Early on we get indications that her father dies badly and at a young age. Dawn then recounts an hysterical early encounter with the Queen Mother when she came to visit their typical RAF house. Four year old Dawn thinks the Queen Mother is a witch.

She pens a great letter to her niece largely about body image- so funny, with endless commentary about cipolata toes. The family lives in Cyprus for a while, and Dawn comes across war and death for the first time. On her return to England she regales with stories of her scheming, hard-drinking drinking grandmother.

We hear Dawn growing up- tales of boarding school antics, leaving school, first relationships, and meeting Jennifer Saunders (the Fatty of the title) at Teacher's College in London in the late 70s. Lovely to think that we were both going to see Rocky Horror multiple times back then.

She has an early engagement to a young RAF man, who soon moves into tea. Later she recounts meeting and marrying Lenny Henry. Lenny comes from a large Caribbean family, and I was most intrigued to hear that his mother's favourite drink was Guinness Punch- a heady mix of Guinness, condensed milk and nutmeg! Perhaps I've finally found a way that I might like Guinness! It sounds fabulous..... Note to self- Definitely must try this.

She speaks so passionately and fervently about her relationship with Lenny that listening to this audiobook in 2011 you can't help to feel a bit sad knowing that their marriage did actually end last year. A large number of the letters are written to her father. These are the most poignant letters of the book. I came across a copy of Dear Fatty in a bookstore after finishing the audiobook, and I really enjoyed flicking through the picture sections, providing perfect images to match the words.

I'm not usually one to read memoirs, or even newspaper articles, about actors or people in show business but this one was really most enjoyable. I just wish that it hadn't been abridged for the audio book format. Besides learning about Guinness Punch, I also learnt that Jennifer Saunders was married to Adrian Edmondson! I had no idea.

I'm really quite enjoying my dabbling with audiobooks. My drive to work used to take 4 minutes, then my workplace moved in March this year, and it takes me 15 minutes each way now. Plenty of time to listen to something interesting. Luckily, it seems there's plenty of interesting audiobooks to keep me happy during the commute. Really, I do know it's still a pretty quick drive, but when you live in a small town like I do, well, 15 minutes is a long time, and I'm enjoying putting it to good use.
Posted by Louise at 22:23

I work from a home office (and around the country) now, but when I was in an office, the 20 minute commute was filled with audio books. I had to draw the line at suspense/mystery as I became too distracted to drive - hah! I remember the action of a Robert Ludlum (unabridged, bien sûr) and driving like a race car driver as I listened - not good.

I've always found it hard to listen to fiction when they play it on the radio. I get distracted and lose track of the story. At least that was only frustrating, and not dangerous as your audiobook driving was! I'm settling in to listening to memoirs at the moment, but I think I will deplete my library's rather meagre supplies pretty quickly. Most of their audio books are in old cassette version. Their CD supply is limited, and they're already moving on to new audio formats (one that I currently don't understand I must admit, but will have to work out if I have the technology to listen to it).