Somehow I've lived what would be a lifetime for some people and had never seen The Sound of Music! Well, until this year- and now I've seen it twice! I recently saw a local theatre company production, and was then keen to see the famous movie musical.

A number of things were surprising to me. There were Nazis! I'd only ever seen snippets on the tele- Julie Andrews twirling about in Alpine meadows didn't make me think of Nazis, nor did songs like Do Re Mi.

Whilst watching the local theatre company version I was very surprised when they began to sing Climb Ev'ry Mountain. It's a very famous song. Of course I've heard it before. Turns out it's from Sound of Music! Who knew? Everyone seems to have had a go at this from June Bronhill to Christina Aguilera and Michael Jackson.

I think perhaps this is my favourite song though:

It's so silly. Yet so catchy. There's probably not enough yodelling in the modern world.

I also learnt I appear to be the only Australian woman over 25 who hasn't done the Sound of Music tour in Salzburg. Apparently we all go gaga over the rotunda where Rolfe and Liesl sing.

When my friend came around to share my first movie experience of Sound of Music, we ate a number of things, one of which was Caramel Popcorn. I'd pulled this recipe out of the Sunday Telegraph a few months ago, and been waiting for an excuse to try it. 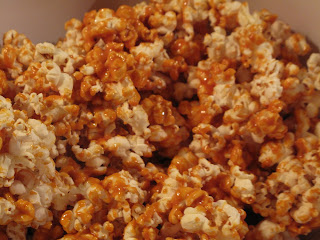 Place the butter, honey and sugar in a saucepan over low heat. Stir until the butter is melted. Increase heat to medium and bring to the boil for 3-4 minutes or until golden and thick.

While caramel is cooking, place popping corn in air popper and collect popped corn in a large bowl.

Remove from heat, and add the bicarb soda and stir to combine. Pour the caramel over the popcorn and toss to combine. Spoon onto a baking tray to set. Break to serve.

Notes.
The original recipe used an oiled saucepan for the popcorn. We don't make popcorn all that often at home, but for some reason I bought a popcorn maker somewhere along the way. It's great.

My son will love this when he gets to try it.

We were too impatient to eat and didn't set the caramel corn out to dry on a tray, and it was still delicious- we had to finish watching Sound of Music after all. And what did I think of Sound of Music? The Sound of Music is essentially Jane Eyre set to music with added Nazis and 7 children, a bit like the 7 dwarfs.  I am glad to have finally seen it, and may even watch it again, especially if I make another batch of caramel popcorn.

This post is linked to Weekend Cooking, a fabulous weekly meme at Beth Fish Reads.
Posted by Louise at 00:19

Caramel Corn and Sound of Music are definitely go-togethers. I never thought of the movie as Jane Eyre set to music. Now I have to see the movie again.

Hilarious! I love the goatherd and I also love Salzburg, though I somehow missed the Sound of Music tour. Thanks for the recipe - I love caramel popcorn in the fall, and the weather's been foul enough here it may as well already be autumn. :)

I like the combination.. now you have me thinking of books and food.... movies and food...LOL

Sounds lovely. I'm glad you finally got to see Sound of Music. I've seen it many times on television. My parents owned the record album, so I know all the songs by heart. Thanks -- fun memories!

The other night I was making popcorn and my hubby said he wanted to try it with butter and honey. He loved it, so I'll make it for him this way next time and see what he thinks!
Here's My WC

Ok, I can't believe you didn't know Climb Every Mountain was from The Sound of Music. My kids were mesmerized by this movie and we even visited some of the famous filming shots when we were in Austria. And, of course, we sang the soundtrack as we drove through the Alps.

Any excuse to make caramel popcorn is a good one, in my humble opinion :)

Glad you enjoyed the movie!

I love caramel corn, especially when it's homemade! By the way, I've never seen The Sound of Music.

I think as kids my sister and I wore out the VCR copy we had of The Sound of Music! Plus I am yet to attend the famed annual sing-a-long they hold in town, not sure I'd be up for the costumes!
As for the tour, let me know a date and time and we will go for sure :P

I saw The Sound of Music several times when I was really little, but watched it almost for the first time (i.e. I couldn't remember it much at all!) when I was staying at a friend of mum's place in Nashville. I remember eating a crazy chocolate bar at the time that was too sweet (it had graham crackers and butterscotch chips and fake marshmallows no it!)... Caramel Popcorn would've been a far better choice :)

I've Sound of Music a zillion times (including in the theater when it was first released). I love the Jane Eyre comparison. Too funny.

And caramel corn? That sounds wonderful. I have never made it, but I may just try when the weather cools.

Hi Louise,
You are the international winner in my Thrive Smoothie contest. I have a cookbook: smoothies: over 200 healthy, nutritious, delicious smoothies and juices for your prize. Send me a private email with your mailing info and I will send it off to you.

I don't have any words to appreciate this post.....I am really impressed ....the person who created this post surely knew the subject well..thanks for sharing this with us.You can also distributes your ideas and experience sharing on Caramel Popcorn