Musee Victor Hugo is a tiny jewel tucked away in the beautifully symmetric Place des Vosges. Not growing up French ( a tragedy that I struggle with daily), I had never quite realised the significance and regard with which Victor Hugo was, and is, held. This museum helped to correct my ignorance. 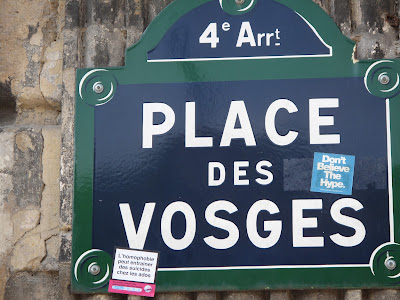 Victor's old apartment is now a fabulous museum. It had a fantastic audioguide available in English. Even better the boys stayed outside and I was able to enjoy it at my own speed, and in peace! It helped me realise that Victor Hugo was much more than an author. He was to feature again and again during our trip. I didn't set out to stalk Victor but we accidentally did a bit. He is buried at the Pantheon, and of course we went there. He was exiled for a time in Vianden, in Luxembourg, which is exactly where we took a day trip to when we stayed in Luxembourg for a few days. We went to see Vianden Castle, and found another Musee Victor Hugo along the way. It is one of the few regrets of my trip (apart from the fact that I wanted it to be two months longer) that I never did read Notre-Dame de Paris whilst we were there. At least I already have my reading for my next Paris trip lined up and ready to go. 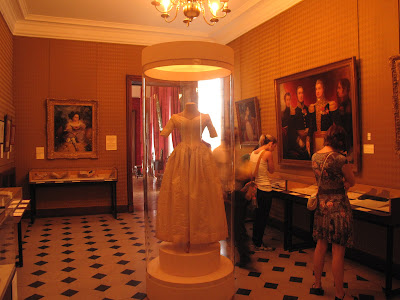 I initially couldn't work out what I thought was odd about the desk in his bedroom. The audioguide told me that this was indeed his writing desk, where he stood to do his writings. That is what is odd! The height. I just can't imagine that it would be comfortable for the many, many hours that he would have stood there. 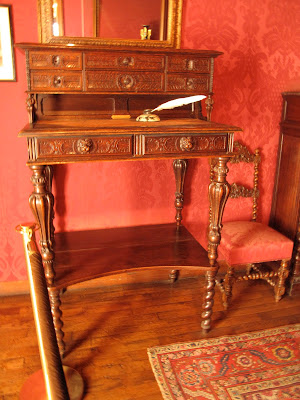 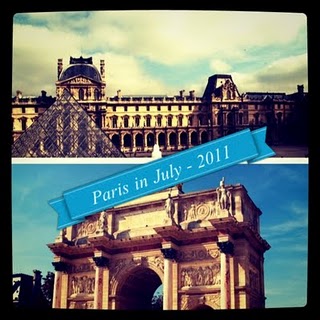 Saturday Snapshot, is a wonderful weekly meme from at home with books.
Posted by Louise at 17:52

Thank you for that lovely tour. The standing writing desk and wallpapered ceiling certainly are oddities!

I love the tiny museums you discover around Europe. Whilst I do like getting lost for hours in the big famous ones, there's something quite intimate about the small ones and you always feel like you've discovered something by youtself.

Gorgeous photos! Thanks for sharing your little museum with us.

That was really fascinating. Thanks for sharing it all with us. How sad that his daughter died so young and her husband too as he tried to save her. Very tragic.

Wonderful post! I love your photos and the info with them. Such a tragedy about Hugo's daughter and son-in-law. Thank you so much for sharing your tour with us.

Sad story, but beautiful images. Must have been awesome to see first hand.

As many times as I've been to Paris, I never made it to that museum. It looks like it was my loss.

I'm always anxious to find new places in France. I love the photos. The wallpapered ceiling is pretty, but I bet it gets to feeling a little claustrophobic.

Gorgeous! You make me want to travel more. The sign about the people living on the streets is really a sobering one.

I don't really know anything about Victor Hugo, so it's all new information to me too. :) I used to work at an office where one of the workers had a standing desk, and she stood all day every day. I certainly wouldn't want to do that.

Loved the photos, especially of the busker!

I'm so glad I found this post! I made a pilgrimage to the Hugo Museum when I was in Paris a few months ago and was so delighted to be there (and equally delighted with lazing about in the square with ice cream in the warm sunshine after.) I seem to have stumbled upon some Paris theme with a few folks and haven't yet figured it out, but am really enjoying hearing about people's perception and enjoyment of Paris. Thanks!

What a very nice tour. Thanks for sharing your visit to the Victor Hugo Museum!

I love it when someone shares photos of someplace I would never see otherwise.

Thanks for sharing these wonderful photos. Very interesting.

Interesting tour. I didn't know anything about Victor Hugo, or that there was a museum about him. That wallpaper ceiling was a bit much, not sure I could look at something like that on my ceiling everyday!

Great photos. The museum looks like a great place to visit.

Thanks everyone for your lovely comments. Small intriguing specialist museums are fascinating, especially in Paris. Ellie, I completely agree with your thoughts. I have so many possible themes for the Saturday Snapshots for July (if only July had even more Saturdays!), I think I will do another post about another little museum that was just amazing. But then I find everything in Paris fascinating. I highly recommend this museum to everyone. It's a fabulous glimpse into the life of this famous and talented man, and into the history of Paris too. Susan, you have every excuse to go back now, the audioguide tour was well worth taking. Paulita, that wallpapered ceiling ceiling would certainly get claustrophobic, and not be a nice place to fall asleep for me.

Interesting article, look forward to visit the museum.
May I share an Interview with Victor Hugo (imaginary) in https://stenote.blogspot.com/2018/07/an-interview-with-victor.html