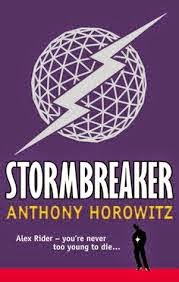 Stormbreaker is not the sort of book that I would come to by myself, spy stories not being my thing at all, but you know, I thoroughly enjoyed it. Which is impressive for one who gave up watching James Bond movies in the 80s. Because the Alex Rider series is very much in the James Bond mould. Indeed Anthony Horowitz was trying to get a job to write a James Bond film (he has an extensive background in film and television writing) when we thought about how old James Bond was now, and wouldn't it be great if James Bond was a teenager. He carried that thought about for five years, and then Alex Rider was born. Stormbreaker was to be the first of 10 books in the phenomenally successful Alex Rider series. It has sold in the tens of millions, and has been credited with getting many kids reading, including reluctant and dyslexic readers.

Stormbreaker packs a punch right from the start.

When the doorbell rings at three in the morning, it's never good news.


Anthony Horowitz credits those words with literally changing his life. Adults know this to be a self evident truth and indeed for Anthony they echo a phone call many years ago in the middle of the night with the news that his father had died.

Alex Rider is already an orphan, brought up by his uncle, a well-to-do banker in London who takes frequent business trips. Alex's parents died in a plane crash just a few weeks after he was born. And so we have it by page 3, 14 year old Alex is on his own in the world with only a twenty-something American housekeeper with visa problems to look after him.

Incredibly soon Alex is drawn into a world way beyond the scope of normal 14 year old boys. There is non-stop action, drama, dangerous villains, evil plots and James Bond style gadgetry to keep the reader entertained and highly amused right to the end. Stormbreaker is firmly set in London and Cornwall but is universal in its appeal. I haven't read a lot of the hard-boiled detective story either but was reminded of them from time to time.

He turned back and looked again at Alex. Something very close to an emotion slithered over his face.

He glanced at the slices of cold lamb on his plate. Dead meat. Suddenly he knew how it felt.


I am rather tempted to read on with this series. I hope my nephews have read them, I do think they'd love them. Even though Stormbreaker was only published in 2000 the technology is remarkably different - yellow pages not Google and game boy devices instead of mobile phones. The whole Alex Rider series is just being rereleased to mark the 15th anniversary of the publication of Stormbreaker. Alex Rider has a pretty cool looking website.

I had an email from our rep today saying that the 15th anniversary Alex Rider's have been technologically updated to make them more 'now'.

Sounds like it was a good move if a more mature reader also noticed how out-dated they were :-)

It's funny but I often am upset at notions of updating books, when they do it to Enid Blyton for instance, but I think it's a good idea to do it for Alex Rider for some reason. i did see something about that happening online, but couldn't find it again to include it in the post.

Ah, finally a younger person's book that I have read -- this was a fun series.