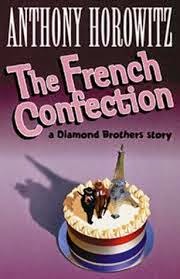 The French Confection was a very obvious book for me to read this month. I'd just read Anthony Horowitz's Stormbreaker, and was about to see him speak at the Sydney Writers Frestival. I'd never heard of The French Confection, and reading it would clearly break my "must read series in order" rule, but as soon as I saw the title in the library catalogue I was sold.

Anthony Horowitz has written quite a few books, a number of them in a series. The French Confection is a book in the Diamond Brothers series. It was helpful that I saw Anthony speak this week as he explained that there are never any parents in his books, he usually kills them off in Chapter 1. Of course this has been a very common ploy in children's books for a very long time, but I'd never heard an author say it before. The Diamond Brothers are Tim, who is 25 and a private detective, but rather dumb and not a terribly good detective. Tim's younger brother Nick is 13, and clearly the brains of the operation. Nick and Tim's parents have emigrated to Australia in an earlier book, and Nick and Tim have stayed on in London.

The French Confection takes them to Paris of course. We can see that clearly enough from the cover. And I'm going to like pretty much any story set in Paris. Here, the boys set off to Paris on the Eurostar after Tim wins a trip to Paris on a tub of strawberry yoghurt. Very quickly odd and rather dangerous things start happening. Someone is dead under a train. Two men are trying to kill Nick and Tim.

Anthony Horowitz at the Sydney Writer's Festival said that he tries to write visually, and he certainly does.

The first was in his forties, tall and slim, wearing a white linen suit that was so crumpled and dirty, it hung off him like a used paper bag. He was one of the ugliest men I had ever seen. He had green eyes, a small nose and a mouth like a knife wound. None of these were in quite the right place. It was if his whole face had been drawn by a six-year old child.


I can see that man. Just like I can see Paris from this:

Paris is a big city full of French people. It's a lot prettier than London and for that matter so are the people. They're everywhere: in the street-side cafés, sipping black coffee from thimble-sized cups, strolling along the Seine in their designer sunglasses, snapping at each other on the bridges through eighteen inches of the latest Japanese lens. The streets are narrower than in London and looking at the traffic you get the feeling that war has broken out. There are cars parked everywhere. On the streets and on the pavements. Actually it's hard to tell which cars are parked and which ones are just stuck in the traffic jams. But the strange thing is that nobody seems to be in hurry. Life is just a big jumble that moves along at its own pace and if you're in a hurry to leave then maybe you should never have come there in the first place.


Actually, I don't really need to read that paragraph to visualise Paris, but Anthony Horowitz nailed it right there! The parking is atrocious.

The French Confection is but a mere confection itself at 77 pages. At the Sydney Writer's Festival Anthony said that the Diamond Brothers series were based on old stories and films from the 1950s, and that he liked to put a humorous twist on old murder mysteries. Which makes sense now as The French Confection/Connection had been bothering me for a while. I don't have any real memory of The French Connection, apart from the title, but having a look at the plot on wikipaedia it seems no mere coincidence anymore.

Sounds like a fabulous way to be transported to Paris!