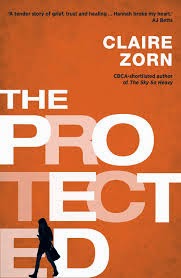 I really enjoyed The Sky So Heavy, so was looking forward to reading The Protected. Seeing it shortlisted for the CBCA Awards pushed me to actually reading it- I did have a copy in the house already so it wasn't that hard. I'm so glad that I did, I really loved The Protected.

I have three months left to call Katie my older sister. Then the gap will close and I will pass her. I will get older. But Katie will always be fifteen, eleven months and twenty-one days old.


Her mother hasn't woken up from her grief in the time since, and her father is injured and damaged.

But at some point the expiry date for accepted grief has passed and Mum's behaviour has slipped from natural to indulgent in Nanna's eyes. She's troubled that our house hasn't returned to its former Vogue Living standard. My mother has lost her passion for finding the perfect throw cushion and to Nanna this is equivalent to losing the will to live. Her remedy is frozen meals and Mr Sheen.


Hannah's story is told with a wonderful warmth, a lightness of touch and frequent use of humour-

I spend most of my time living like an elderly person: reading, watching Miss Marple, mourning the dead.


which is so necessary and so important given the subject matter- not just the loss of a sibling and a family's grief, but also the years of bullying that Hannah endured before Katie's death. It's a modern bullying Hannah receives including traditional methods such as verbal taunts and physical assaults on the bus, but also Instagram and Facebook shaming. Claire Zorn writes the playground cliques to perfection.

I was strongly encouraged to see the school counsellor even before the accident. But I have spent most of my high school career feeling like a freak, I never felt like confirming it by spending time in the counsellor's office.


The Protected was the second book I've read recently to have a list of songs (the first being Favel Parrett's When the Night Comes). Hannah is a bit of a list maker and she includes a list at the start of most chapters. At the start of Chapter 12 we get Katie's Most Played Songs. Rather predictably I only know the older ones. But I checked the others out in the interests of research and curiosity.

I've been very slack with my teen/YA reading as I found a lot of too light and too teen angsty (with two teenagers in the house right now I have more than enough teen angst on my plate!!)

But I did read The Sky So Heavy last year & really enjoyed it - & so did our youngest reluctant reading teen.