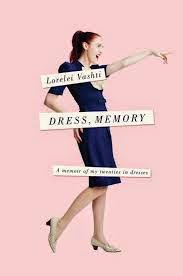 I'm not quite sure why I was so desperate to read this book but I was. Fashion memoirs aren't typically my thing. But I saw a review somewhere when it came out last year. Then as soon as I saw a copy in a shop it was mine.

I think that Lorelei Vashti spends more time thinking about what to wear in a single day than I have in my entire lifetime. Fashion is important to her in a way that it never has been for me.

Some people remember stages of their lives through the smells of certain places or the music they were listening to during that time. I remember them through my clothes. The dresses are precious because they mean something to me. Things become more valuable once you know the story behind them...


I guess I think about books that way, I'll remember where I was or what I was doing when I read a particular book. Anyway, Lorelei's story starts in small town Queensland. She grows up in Australia's ginger capital Buderim. Her family is quite creative and artistic, her grandmother was a drama teacher, her mother sews, her brother paints. She has been vegetarian since 4 which interested me, as Master Wicker has been vegetarian since he was 2.

Most of the story though is of adult adventures. Lorelei spends an exchange year in Turkey in high school. Soon she moves to Brisbane for uni, and later to Melbourne and New York. There are significant holidays to Thailand and India. I had an international life in my twenties as well, but quite different to Lorelei's. It's interesting following her progression from creative writing student, to musician, to editor- as someone completely removed from these fields it's always rather a mystery how people pursue these lines of work.

The book is told mainly chronologically, and the chapters span  her twenties. There are colour plates of a dress representative of each year ( my favourite is 29).


I'd wondered at these dresses surviving so long, but clearly Lorelei keeps her dresses- she has 5 wardrobes in 2 states!

I'm always astonished at how dresses survive so many years. But they do; while the bodies inside them age, they stay young and shapely and full of hope.


Ultimately though, the dresses are intertwined with her sense of identity.

I had my dresses. Everyone seems to think fashion is what other people are wearing- it's a thing you do fro other people, that it's how they see you, but for me it has always been how I see myself.


I enjoyed my time with Dress, Memory. There is a Dress, Memory website, some of the dresses featured in the book are included there, Lorelei has a rather retro vibe.

Like you, my initial thought was...nah, not for me.

But then I started thinking about the few fashion items that I have spent time on - the few pieces of mine that I do know their back story, that were bought for a very special occasion and represent a particular wonderful moment of my history. And like music and fragrances, some clothes are forever linked to a moment in time....just not five wardrobe-ful's!!

Louise I've just noticed that when you quote authors, your quote sits inside a quotation mark - how do you do that?

Whenever I use the quote tab at the top, it just indents...what am I doing wrong?

Brona I'm not sure I can give you specific advice on how I do it. I too just use the quote button too. I highlight the paragraph of text, although I just tried using the button at the start of a paragraph and that put the quote mark there on a preview too. Sorry I don't do anything special, I'm not sure how I achieve it. Perhaps it's just some difference in operating systems with blogger. I'm on a Mac?

Maybe it's a Mac thing, although I'll try highlighting the text just to check - thanks.