I first learned of Gemma Bovery the book via the film. My friend Sim at Chapter 1 Take 1 featured the film trailer in September last year. Naturally, I was immediately smitten with the trailer. So funny, so fun. Soon I was discovering that the film was based on a 1999 graphic novel. Naturally I ordered it online immediately. The film is finally screening in Australia as part of the Alliance Française French Film Festival this year, not that I'll get to see it there, but I need to be prepared to see the film, so I grabbed an opportunity to read the book when I was in Newcastle for the Newcastle Writer's Festival last weekend.

I was drawn in by the very first sentence.

Gemma Bovery has been in the ground three weeks.


Ok, you have my attention! 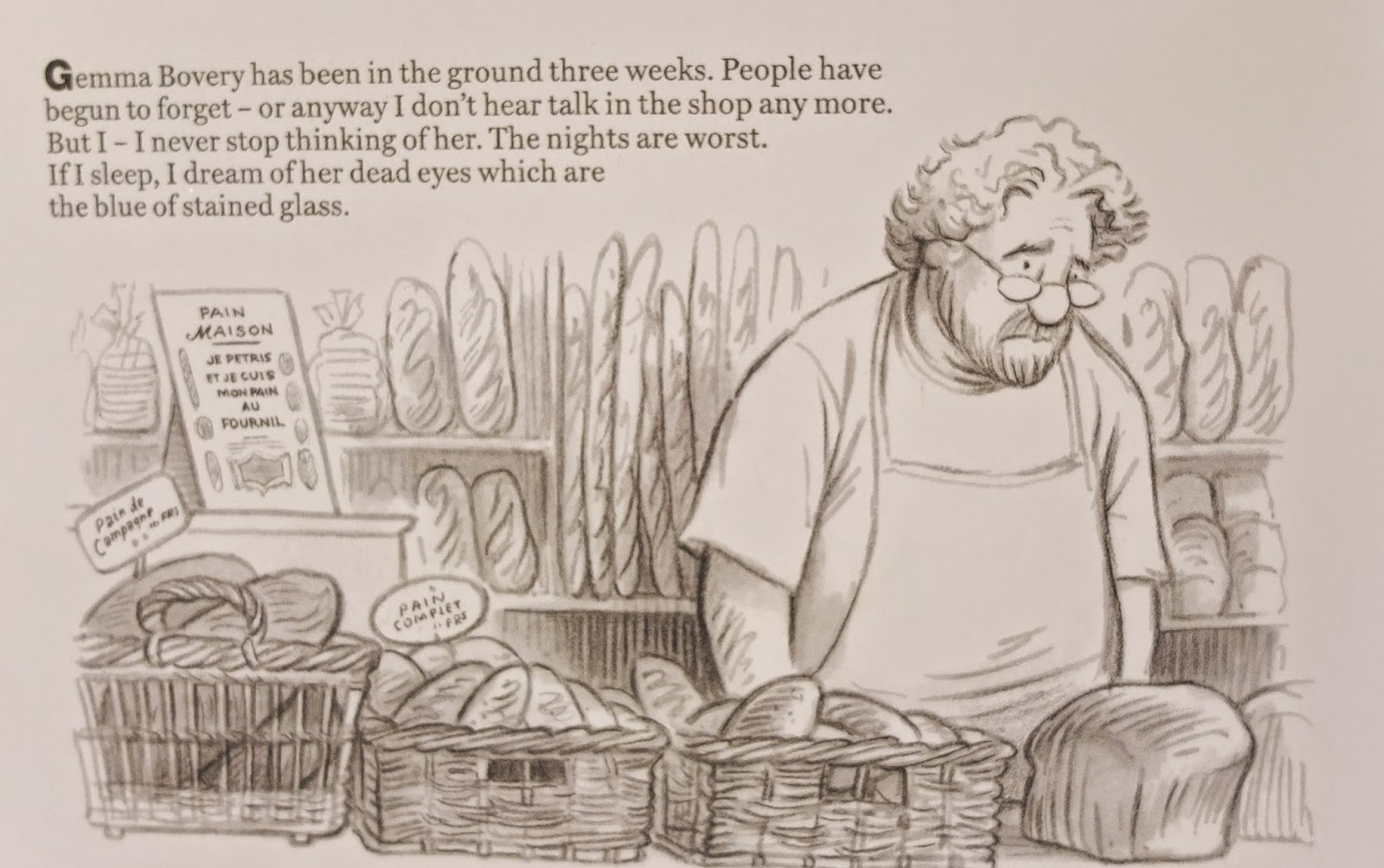 Our narrator is Raymond Joubert, a middle aged man who is now running the family bakery in a small town in Normandy. Raymond has full access to Gemma's diaries after her death, and he narrates from reading her diaries, and also his own observations of the events since the Bovery's moved to France. Set in both Normandy and London, the present and the near past Gemma Bovery is a fascinating modern riff on Flaubert's masterpiece Madame Bovary. I have read Madame Bovary but a number of years ago, so that while I remember broad brush strokes of action, I don't remember particular details. Joubert points out the parallels between the Bovery Bovary stories so that even those who weren't at all familiar with Madame Bovary would still find Gemma Bovery compelling.

And there are many parallels, so many affairs, so much heartache, accumulating debts and the gossiping nature of small town France. I've only read a handful of graphic novels but I do think that Gemma Bovery would be one of my favourites so far.

And it is laugh out loud funny at times.

I remarked her companion at once: an anglais, about 35, in breeding condition; an expensive linen jacket, his inside leg measurement much en valeur.


It is written in an odd mix of English, French (sometimes translated, other times not) and Franglais. Posy Simmonds would appear to speak much better French than I do, she also has a great understanding of the French I think. I'm not sure how easy Gemma Bovery would be for someone with absolutely no French. 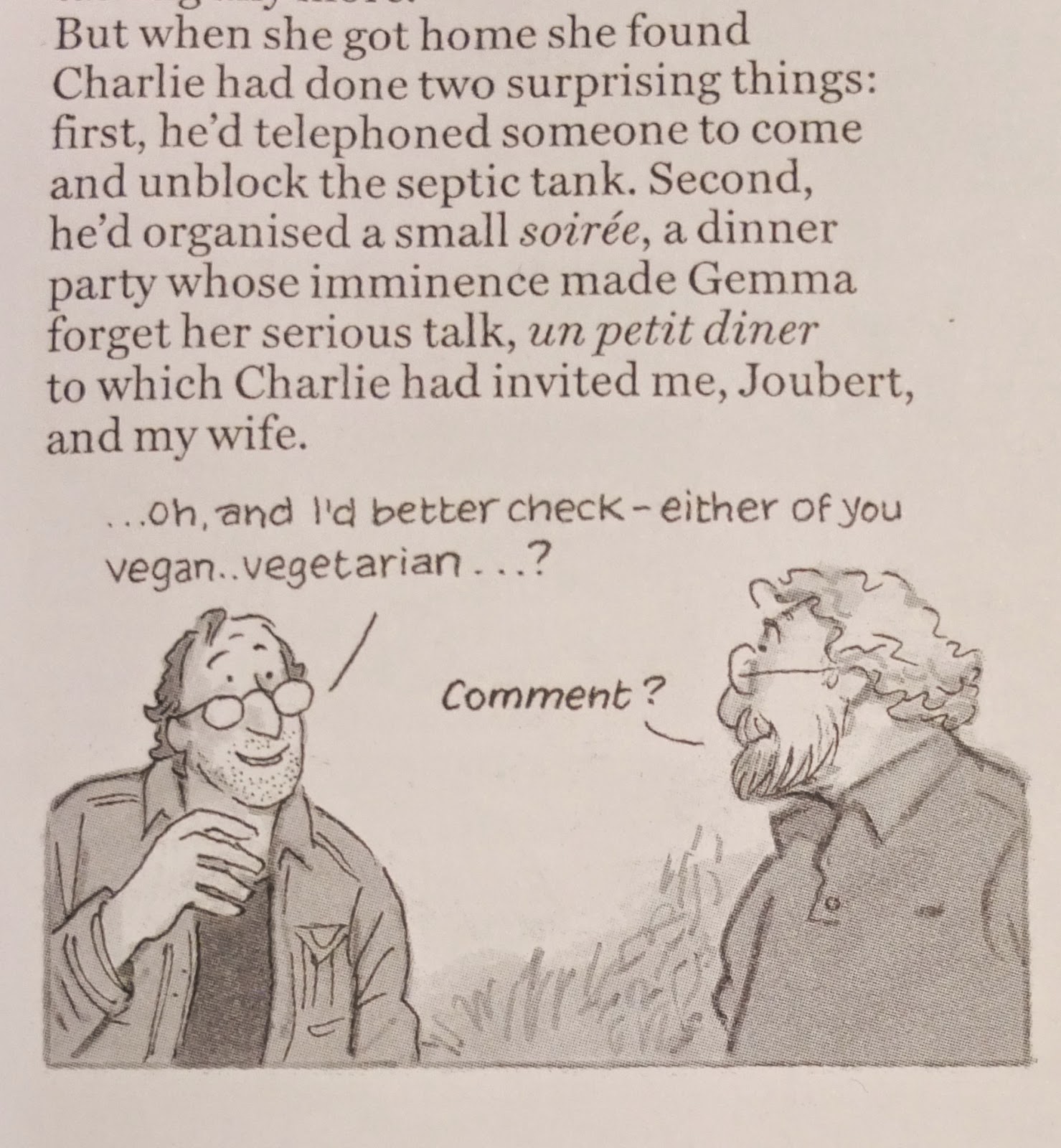 Gemma Bovery was apparently first published in The Guardian, which I find quite intriguing. Not that there is anything wrong with newspapers publishing cartoon strips, indeed they have quite a long tradition of exactly that. It's just that Gemma Bovery has what would be described in film or tv classifications nudity, sex scenes, language (I certainly learnt some new French words) and adult themes. I'm not sure it would get published in newspapers here. Perhaps it was in a somewhat different format then?

I found a rather intriguing youtube video of Posy Simmonds discussing Flaubert, and also the real life inspiration behind Gemma Bovery.

The pictures do all the work of description. They do everything, they do weather, they do landscape, they do details.

Labels: Books on France, Books You've Never Heard Of But Just Have to Read, Dreaming of France, Flaubert

Thanks for the shout out! So far Gemma has only shown her face at a very few film festivals here in the states but not in my area at all. I'm curious about that writers conference though; do you do any additional writing besides the blog, and where can I read it? You always have such clarity in your blogposts, and your curiosity always goes beyond the obvious.

Louise, Thanks for tracking down the book. Now to get our hands on the movie too. Thanks for playing along with Dreaming of France today.

Interesting! I saw the movie (in France) and found it quite charming. I had no idea it was based on a graphic novel. I never read them, but I might have to get my hands on this one.

I always enjoy your book reviews set in France & this one especially .... plus can't wait to see the film! Thanks!

Haven't heard anything about this one here. Thanks for sharing it. I tend to live with my head lost in the clouds somewhere, and I miss things.