When the Night Comes 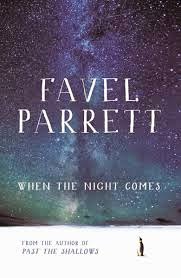 I didn't know a lot about When the Night Comes when I picked it up. I'd heard much of Favel Parrett's first book, Past the Shallows, which I still haven't read, but I was about to see her in a session at the Newcastle Writer's Festival, and as I was keen to do some prereading, so I thought I'd check out her newest book.

When the Night Comes is an odd book- an odd mix of story that takes us between Tasmania and Denmark, and diverts off to Antarctica at times. Structured with two linking story lines, When the Night Comes tells the story of 13 year old Isla, who has recently moved to Hobart, and Bo, a Danish cook, working in the kitchen of the Nella Dan, an Antarctic supply ship. Clearly these two story lines were going to be linked, but I found it frustrating and annoying that how they were linked wasn't really clear until 120 pages in. The time lines seemed blurred before that.

I enjoyed Isla's story more I suppose. Isla is moving to Hobart with her mother and brother when we meet her at the start of the book. Her mother is distant, leaving the kids alone on a rough crossing to Tasmania.

It was only the ship that was keeping us safe. Only thin layers of steel and an engine pumpkin away in the dark were keeping us above the water, which would gladly swallow us all up like we had never ever been.


The book is certainly not complimentary to Hobart, which I have always found to be a charming city to visit. The weather is always cold and miserable (which may be true to some extent), and there is rather a sense of foreboding.

Some of the steps were bowed and stained, and the stains looked like old blood rusted orange with time. Blood soaked into the stone. We'd go down one step at a time as quickly as we could. Down, down, and we'd try not to look ahead into the dark lane. But at the bottom, in the cold cobbled shadows, ghost would claw at our clothes, try to grab hold of our hair, whisper in the echo of the stone.


Bo's story is a bit more distant for me. Bo is Danish, he grew up on an island, with a small blue and orange boat that he fished from with his father when he was not off sailing. Now Bo is a sailor himself, or a cook, working the Nella Dan on her summer supply trips to Antarctica. It never occurred to me that Antarctic supply vessels would need their own baker.


I hope these Antarctic bakers are still there, not replaced by frozen bread. I like the notion of ships smelling of freshly baked bread heading off into the Southern Ocean. The story seemed more about the Nella Dan than Bo in many ways. MV Nella Dan was a real ship, made fictitious here, although she meets the same fate.

Rather unusually there is a suggested playlist at the back of the book. A list of songs mentioned during the book, most of them already old when the book is set in the mid 80s. I listened to these songs while reading the book. Many of them were familiar of course, a few new to me.