This House of Grief 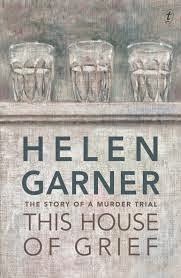 The deaths of three children will always make news. The deaths of the three Farquharson boys in rural Victoria in 2005 are particularly memorable for most Australians. All three boys died in their father's car when it veered off the road and plunged into a dam as their father, Robert Farquharson was driving them home after an access visit on Father's Day. He said that he had a coughing fit and passed out, and was unable to save his sons from drowning in the dam. Their tragic, horrifying deaths were widely covered in the media, as were the subsequent trials. It's a grim story, and one that I wouldn't trust to any other author. If anyone else besides Helen Garner had written this book I wouldn't have want to read it. I've read a number of her books before, the most impressive of which, Joe's Cinque's Consolation, was also the story of a murder trial.

Naturally I had read quite a bit about the deaths of the boys, and the trials, and I went into this book with rather strong ideas about who was responsible. Helen Garner shook these beliefs.

two broken people grieving together for their lost children, in an abyss of suffering where notions of guilt and innocence have no purchase.


Garner watches everyone with her expert writers eye.


Cindy Gambino slid in without fanfare, past the seats where her family and Farquharson's sat tightly wedged. How small she was, this woman whose loss was beyond imagining, yet who would not lay blame. Her hair hung past her shoulders in silky falls. Her smooth face with its large, heavy-lidded eyes showed no expression, but her skin was the pale greyish-brown of a walnut shell, as if grief had soaked her to the bone, and she walked so carefully that she appeared to be limping. The raised witness box, near the front of the court, and the dock were only fifteen metres apart. Down the length of the court, above the lawyer's heads, Gambino and Farquharson would have to look straight at each other.


The trial takes up 200 of the near 300 pages of this book. I found myself becoming increasingly despondent at the legal process.

The sheer bulk of technical minutiae induced a hopeless stupefaction. I had to flail at myself to stay alert. Some of the jurors appeared to be nodding off. Even the judge looked blank and stunned; he took off his glasses and fiercely polished them. One journalist near me skimmed the Age television guid. Another was doing Sudoku under the desk. The hands of the high clock seemed to slow and stop.


There are long discussions on whether cough syncope really exists. It does. I thought it was interesting that more wasn't made of Robert Farquharson's respiratory illness. There seemed to have been no testing done. Did he have pertussis? Was he ever tested for possible causes of his illness, or cough syncope given that this was the basis of his legal defense? More astonishingly in the appeal case was the decision to expunge any mention of his treatment for depression at the time of the deaths of the boys.

What he (the judge) feared, if he should admit evidence from lay witnesses about depression, was that the jury might take it upon themselves to speculate about an imagined link between derision and motive for murder. Speculation of any kind was anathema.


And yet it was fine to besmirch the character of a witness by pointing out his involvement in a pub brawl to discredit his evidence? Really? This is how we make such important decisions?

The last 100 pages really flew by. The appeal process once again made me question the way that our courts work - thankfully something I've never seen up close. The appeal trial seems much more dramatic than the original trial. Can it really only be on appeal that the 000 calls are played? And it's fine to allow home videos of recreations of the accident site by relatives of the defendant? If your appeal goes all the way to the High Court then there will be a 20 minute session before the Justices! I get that they're busy people, and parts of the other trials do seem to drag on unnecessarily, but then to reduce it all to 20 minutes... Perhaps it is all about the vibe after all.

Sounds very disturbing as well as hypnotic. Of course, we don't know anything about it here in the US because it's not about us.

Thank you for the shout out Louise.

This is not a book to enjoy. But it is thought-provoking and reminds us all of what it means to be flawed, complex, contrary human beings. Garner's writing and ability to elicit empathy where you thought none would be possible is extraordinary stuff.

Court stories always make me question justice. I don't know what the answer is but it's hard to trust the courts.

Geez I love that clip from The Castle. Amazing how often it's referenced in everyday conversation (in our house, anyway!).