The Boy Who Climbed Into the Moon 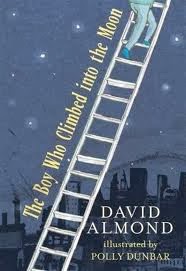 I read David Almond's extraordinary The Fire-Eaters last year. I've been keen to read more of his writing ever since- checking out my library, and even buying a book online (not this one). I've been enjoying a few quick reads over the last few weeks- perfect for our ridiculously hot Australian summer this year- it's much too hot to concentrate on anything lengthy, I have no idea how everyone else is reading The Luminaries in this weather.

There is what seems to be a typical Almond start.

Some time ago, there was s rather lonely boy named Paul who lived in a city in the north of England. He lived underground, in a basement flat at the bottom of a great apartment block. Over his head, there was floor after floor after floor, and family after family.

This made the world seem very heavy and the sky seem far away.


Paul decides to go and touch the sky even though he'd never thought that he might be adventurous. Of course he sets of on his adventure and meets a cast of rather unusual characters that populate his apartment building. It all becomes rather bizarre, diverting off to thoughts about war, and while that is moving, it's also a becomes even more odd.

"Correct! It was the obvious solution. There we were, billions and zillions of us lined up on the battlefield, armed to the teeth, glaring and growling and gnashing our teeth, all of us determined to kill as many of each other as we possibly could. I just took a shortcut. Soon as any battle started, I just dropped down dead."


There are discussions of fate and destiny. Of imagination, spontaneity and planning.


The back cover blurb quotes:


I don't think I really agree with that- I do think that David Walliams is much a better fit for Dahl's legacy. Although we do learn that sausages are better than war, that's somewhat Dahlesque. Philip Ardagh proclaimed it a modern classic, a fable for all ages, and "the kind of book I've always wished The Little Prince had been". I do think that The Little Prince is a better comparison than Dahl. But I didn't understand The Little Prince that well either. I'm sure both would reward rereading at some stage and while I didn't love The Boy Who Climbed Into the Moon as much as I expected, I'll certainly keep reading David Almond.
Posted by Louise at 13:32