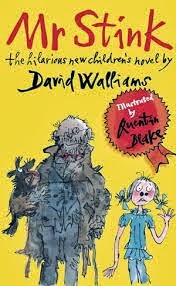 My love affair with David Walliams rolls on. Mr Stink is the third book by Walliams that I've read in the last few months. I finally got to reading his first book The Boy in the Dress in October last year, and then Billionaire Boy as a Christmas treat. I've had some idle moments this month and so picked up Mr Stink on a whim spurred on by the fact that the tv version was played here recently and I'd taped it and knew it was waiting on the hard drive for me, and I'd come to notice that many of my reads this month have yellow covers.

Mr Stink is perfect Walliams. Chloe Crumb is 12 years old. Everyday as she is shepherded to her "posh private school" she sees a homeless man sitting on the same bench with his little dog. She is intrigued by him. Mr Stink has appeared in town suddenly and taken up residence with his little black dog, who also smells.

No one knew where he had come from, or where he might be going. The town folk were mostly nice to him. They sometimes dropped a few coins at his feet, before rushing off with their eyes watering. But no one was really friendly towards him. No one stopped for a chat.


But Chloe is curious. She lives in a "boring little town where nothing happened that hadn't happened the day before."

She was only twelve and she had never spoken to a tramp before. Her mother had forbidden her to speak to 'such creatures'. Mother even disapproved of her daughter talking to kids from the local council estate. But Chloe didn't think Mr Stink was a creature. She thought he was a man who looked like he had a very interesting story to tell- and if there was one thing Chloe loved, it was stories.


Of course Mr Stink does have a story to tell. And so does David Walliams, he does it with his trademark intelligence and humour.  The highlight of which is again a list (similar to those in Billionaire Boy) of the nonstop and rather nonsensical extracurricular activities undertaken by Chloe's over achieving sister Annabelle in a typical week.


And in a beautiful moment of synchronicity I learnt what krumping was this week. I'd never heard of it before. And here it is again. I'm not certain that my life has been enriched. Is all knowledge enriching?

Mr Stink is David Walliams' second book for children. In his thank you at the beginning of the book he thanks his readers.

Finally I would also like to thank all the people who wrote to me to say they enjoyed my first book, The Boy in the Dress, particularly the children. It is very touching when someone takes the time to write a letter, and greatly encouraged me when working on Mr Stink. I hope it doesn't disappoint.

There is a sweet tele movie version of Mr Stink, with David Walliams appearing as the Prime Minister. It was on tele before Christmas and Master Wicker and I got to watching it this week. Rather enjoyable- but the book was better (of course).

Labels: Books You've Borrowed from your Nephew, David Walliams, on the tele

There is a PBS hour-long show about Mr Stink. It was on here in the US around Christmas time. It had Hugh Bonneville (the dude who plays Robert on Downton Abbey) playing Mr Stink and it was super good. I haven't looked online but it might be on the PBS website.
Su

This author is barely in our telescope here in the US. Hope his publishers will change that soon.

I've been meaning to read one of Walliams books - but your reviews are so good, I feel like I can almost get by without reading one myself :-)