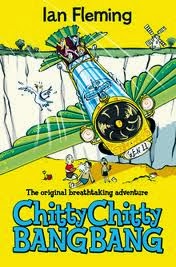 I think it's fair to say that Chitty Chitty Bang Bang is more famous as a movie than in its original book format. I've seen the movie several times over the years of course, but had never read the book until recently. Ian Fleming is much more famous as the author of James Bond. He lived quite the life it seems, and was to die quite young. Actually a lot of children's authors seem to die quite young I'm learning. For Ian Fleming a life of hard drinking and heavy smoking was to cause him to have a series of heart attacks in his early fifties.

After one of his heart attacks he was convalescing in a seaside hotel in England. He was banned from his typewriter, and a friend gave him a copy of Beatrix Potter's The Tale of Squirrel Nutkin, and suggested that he write out the stories about a magical car that he used to tell his young son Caspar. Chitty Chitty Bang Bang was the end result of this rather odd set of circumstances.

Ian Fleming begins by dedicating Chitty Chitty Bang Bang to a car built in 1920 by Count Louis Zbowroski. I loved the cross channel setting- the Pott family lives in England of course, after Chitty is acquired and fixed up they set off for a summer picnic at Dover, and after a series of misadventures in the English Channel the book ends up in Paris (now that was rather unexpected, a Parisian setting!) with a planned robbery in the most famous chocolate shop in the world, Le Bon-Bon. Some of the Channel adventures were reminiscent of Enid Blyton's Famous Five stories of shipwrecks and smugglers.

It's a cutsey family adventure, where the good guys win of course, and the baddies are outsmarted by a car. Which is all quite different from the movie plot as I remember it- the famous child catcher character was created by Roald Dahl for the film script and didn't feature at all in the book. The core idea of Chitty Chitty Bang Bang, a magical car that can transform herself to fly or to swim is fantastic. Sadly I was somewhat underwhelmed by the book. Rather too much mechanical detail at times for me- it's safe to assume that I don't need any mechanical detail I suspect, and just a bit well, pedestrian. There must still be interest in these books though because there are now three recent sequels penned by Frank Cottrell Boyce, although Chitty Chitty Bang Bang now takes the form of a souped up Kombi Van.

Ian Fleming didn't live to see Chitty Chitty Bang Bang published. He died of another heart attack on 12 August 1964, his son's twelfth birthday. Poor Caspar was to live a sad life and then die an even earlier death, taking his own life with a drug overdose in 1975.
Posted by Louise at 00:19

I remember trying to read this book when I was a child and not getting very far into it. I loved the movie and I think that it was too different from the movie. I've thought about possibly reading it now that I'm an adult but there are so many other books I want to read. I don't know how likely it is I'll ever get around to it.

I've only seen the movie, but you've whet my appetite now, although I do tend to skip over anything mechanical. Children's writers (at least, vintage ones - I hope it is not so now!) also seem to have a lot problems with their own relationships with their children.