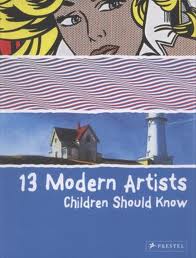 I had been rather pleased with my academic success with the 13 Artists Children Should Know. Emboldened by that success, I went on to read 13 Modern Artists Children Should Know. Whilst I managed to get 67% of the cover art references on the Artist book, this soon plummeted to 0% here. The comic book style of the top one looked familiar, and those red spots readily brought to mind one of my favourite cartoons of the 20th century. 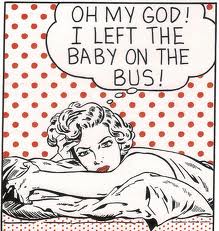 The other two drew a blank. Which is really quite amusing because I was just bemoaning my lack of knowledge of the bottom artist recently.

I learnt even more about Picasso, who certainly sounds an interesting character. I never knew enough before to know that I should be interested in him. He liked the carefree way that children drew pictures, and as an adult tried to teach himself how to paint like a child. He has a great quote that "every child is an artist. The problem is how to remain an artist once he grows up." Which is very true.

It seems that quite a number of modern artists have rather tragic, short lives. Picasso lived to 91, but Yves Klein died from a heart attack at only 34, shortly before the birth of his son. Yves Klein famously invented his own colour (many early artists did apparently) International Yves Klein Blue.

Picture credit. Check out the video on that site- and this is before all the good drugs they discovered in the 60s!

An attractive shade of blue, but blue nonetheless. I now realise that I may have seen what was either an Yves Klein original, or something that certainly owed a great debt to him. I remember years ago seeing a "painting" at the Art Gallery of New South Wales that was a rectangle of a blue monochrome (without even the interest of any texture like the work above). I've always thought of it as The Paintchip, and it comforted me to know that even I could create monochromatic art good enough to hang in a prestigious gallery, if only I could be bothered. Perhaps it was actually great art because I've remembered it for so long?

Eva Hesse also died tragically young at 34, this time from a brain tumour. I don't imagine that I will ever be arty enough to understand her sculptural work with rope. 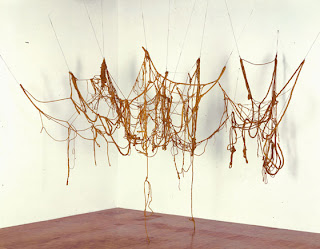 The cover artists top to bottom are Roy Lichtenstein, Bridget Reilly and Edward Hopper.
Posted by Louise at 13:38

I'm tempted to get this one for my daughter (and myself). We spent a lot of time in art museums on our recent trip, and I confess the modern art was not my favorite, but my daughter insisted we not neglect it. Probably I should have read this first!