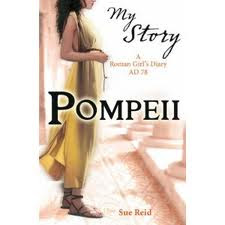 Recently I've been reading another My Story book to my 10 year old son for bed time reading. He's probably almost grown out of bed time reading, but we plug on, rather slowly it must be said with this book. It really hasn't grabbed my attention, or his. We're 90 something pages in, nothing has happened, and they all have odd names, even the dog, Pollux. Although any book set 2,000 years ago will have some interesting words. And this one is no exception.

Mother handed me the wooden distaff.

A word so important that it needs its own wikipaedia page. Not being one prone to doing much spinning I wasn't aware that a distaff was a tool used in spinning flax and wool. 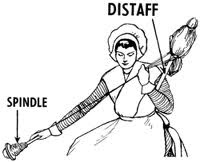 
An instrument used in ancient Greece and Rome for scraping the skin after a bath. The Free Dictionary.

Strigils are so important they're on display at the British Museum.

Mother has bought me a new tunic- it is very long, like a proper grown-up stola. 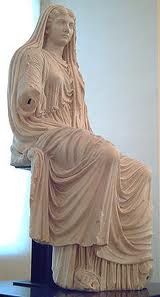 I loitered as far back in the party as I could, feeling as fat and full as one of those stuffed dormice.


Any of various small, squirrellike Old World rodents of the family Gliridae. They hibernate, and it is speculated that their name comes from the French, dormir, to sleep.

As an Australian, I've heard of dormice (although always presumed that they were doormice), but didn't really know what they looked like (or that you could eat them). I don't generally find rodents all that cute, but these are certainly too cute to eat. 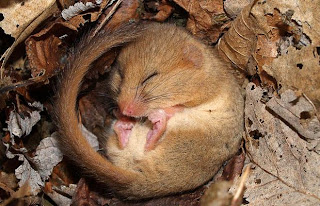 Although it definitely appears that they did.
Posted by Louise at 00:02

Thanks. I knew dormouse from Alice in Wonderland. I suspect I've read past distaff without looking it up way too often (the illustration helps).

Interesting new words for me.

Dormice was the only one I knew! I love that you have a picture on your post today!

Here in the UK, we definitely don't eat Dormice, although they can cause havoc in the winter, if they can find a warm cosy place in the attic of the house to make a nest!!!

I didn't know what a 'Stola' was, I had always assumed they were called 'Togas'.

I also didn't know the word 'Strigil', but it definitely looks like an item of torture and not something I would be cleansing my skin with!!!

Ooooh, these words are very interesting. I would luv to read the diary of a Roman girl. I'll bet this book is really good. Thanks for the words.

Thank you for the pictures too.

All these words was intersting ad the pictures helped me to understand better ! Thanks

Wow, I've learned something today. Most particularly, that I'd never have the heart to eat a dormouse.

Or, here in Geneva - rabbit or horse either.

My kids are 13 and 15 and my husband and I still read to them at bedtime. I hardly ever see them any other time, so it's a good way to spend time with them and wind down. It's also a good way to read things I wouldn't otherwise read, and to see what their interested in reading. It's a slow way to get through a book, but that's ok.

Whoops, that should have been "what they're interested in..."

Joy - I love pictures for unfamiliar objects. They help so much.

TBM- Thanks for visiting.

Kathy- Thanks, I enjoy the pictures too. It really helps me remember the words, when I can pair it with the image.

Yvonne-I'm glad that we don't have to eat dormice any more. They are much too cute.

Tea- I was expecting great things from the book, but it's a bit of a struggle to get through. But we're going to finish it- I don't think my son is as bored as I am.

Annie- glad you enjoyed them.

Susan- how wonderful to still be reading with your children. I'm wanting to keep ours going too of course. It's a real shame when we get a book that slows us down. I'm hoping for a better one next time.