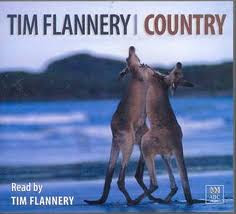 I'm very thankful for the day several years ago that I bought this 3 CD audio book. When did I buy it and why? I'm not exactly sure, I vaguely remember it being on a sale table. But one day recently I decided to pick it up and put it in the car stereo. Just to try it. And I'm so very glad that I did. I don't often listen to audiobooks. My attention wanders, and I find that much time has passed and that I've really lost track of what is going on. This audiobook, read by Tim Flannery himself, grabbed and held my attention from the start.
I've long admired Tim Flannery and his work, and always meant to read more of his writing. He comes across well on the tele, or in interviews, and I love those shows he does with John Doyle. He is clearly intelligent, with a lovely sense of humour.
This engaging and fascinating book is part memoir, part travelogue, part non-fiction work on kangaroo biology. Tim Flannery, who will go on to become Professor Tim Flannery, and Australian of the Year in 2007 didn't get into the course he wanted to study straight out of school. He wanted to study biology, but instead got into humanities at La Trobe. It's great to see a more circuitous path lead to great success.
The first CD and a half documents a failed circumnavigation of Australia that Tim made as a student in the summer of 1975. Tim sets off with a friend, both ill-equipped for the journey, with little money. Rather hilarious recountings of his attempts to collect museum specimens from the roadkill encountered on the trip. He describes a frontier version of Australia that probably still exists out there, and makes you long to do your own roadtrip through the red desert heart of our vast continent. Because of this newly stirred longing I read the article about driving across the Nullabor in this weekend's Weekend Australian. The article references what looks like a fabulous audio tour on the ABC site of Crossing the Nullarbor. It's only stirring the pot more. My feet are becoming decidedly itchy.
Disc 2 has a couple of astonishing chapters filled with astounding, but little known facts about marsupial anatomy. Logically enough they have feet adapted and fused to take the strain of hopping. Marsupials exhibit what is thought to be the primitive version of mammalian genital anatomy. Male kangaroos have a "capacious scrotum" that sits in front of their S shaped penis. The female kangaroo has two vaginas but doesn't give birth through either. They can suspended development of a new foetus whilst the older sibling is still suckling. The mother has 4 teats and can supply different milk out of each- one appropriate for a 2 year old who needs more water, and one appropriate for the newborn, who needs more energy. Each youngster only ever uses one teat, and the mother delivers milk specific for it's age and stage.
I've always loved the word capacious.
Some other random factoids I learnt from this wonderful book:
You can begin searching for dinosaur fossils in an outback pub.
Tammar Wallabies can drink salt water, and are one of the few marsupials who breed seasonally. Their embryos lurk in suspended animation until the summer solstice, and are then born a month later in late January. 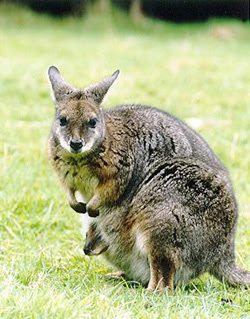 Possums have the most dextrous ankle joints known. They can move their ankles through 180 degrees.
Most marsupials are born when they are as big as a grain of rice.
One sixth of Australia drains into Lake Eyre.
There was a large carniverous kangaroo called Propleopus oscillans.
Kangaroo populations increased dramatically with the pastoralisation of the Australian landscape. It's not exactly known why but some theories include the farmers thoughtfully providing more frequent watering spots, and killing dingoes.
Still, 7 kangaroo species (10% of those that existed) have become extinct since white people came to Australia, and 7 more (30% of the small kangaroo species remaining) are now critically endangered, and no longer make an impact on the Australian landscape.
Tim ends the book on a rather pessimistic note, leading naturally to his more recent books such as The Weather Makers, which focus much more on climate change and the uncertain future ahead of both humans and kangaroos.
Posted by Louise at 21:45

Tim Flannery is a top Aussie and when we were in Adelaide we were rather proud of his time spent as Grand Poobah of the museum there.

Love the facts too - maybe something I'll sniff out when we're settled into our flat and online more frequently. Although it could just make me homesick....

It certainly would make you homesick! It unsettled me, made me yearn to take months off and drive around the country. The facts were just a few of the many that captured my imagination. The book is stuffed with facts, but presented in such an interesting, chatty, affable way.