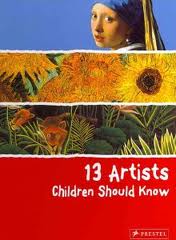 I searched out this book for a school project for my son. I was keen to read it after finding and loving 13 Buildings Children Should Know. And I knew that I needed to read it when I could only name 2 of 3 artists featured on the cover. Try it. The top two are easy. The third stumped me. The style looked a bit familiar, but not the actual image.

Of these, I was pleased to have heard of all but three of them. Rousseau, Klee and Marc have escaped my notice til now.  Eight of the 13 I could probably recall some of their major works and/or recognise their style! da Vinci, Vermeer (thank goodness there was that book about The Girl with the Pearl Earring a few years ago, otherwise this might have been different), Monet (one of my favourite artists, I made a pilgrimage to his garden at Giverney in 1998), van Gogh, Matisse, Picasso, Kahlo and Warhol.

Two women out of 13. Not bad perhaps. Kahlo has a recognisable style. Although it is a style I don't particularly like. I don't find redoing the same painting of your own monobrow all that inspiring or artistic I guess.

Some things I didn't know before I read this book.

There is a colour called Vermeer Blue.

I quite like Franz Marc's work, although am a bit disturbed by it. Franz Marc became famous for pictures of blue horses, yellow cows and red cats. He liked animals more than people, though that they were cleverer than we are as they don't try to be better than nature or destroy it. 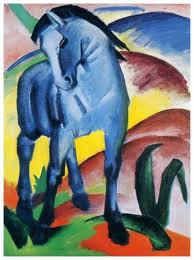 The Saltimbanques were street artists, clowns, harlequins and actors who went from town to town with their show. Picasso did a painting of them. I imagine this was the inspiration for Cirque du Soleil's Saltimbanco.

Marc Chagall sounds French, but was born in Belarus.

Frida Kahlo contracted polio in childhood. She took up painting at 18 when recuperating from a motor vehicle accident that broke her back.

Andy Warhol bought a hairpiece at 25.

The cover artists are of course, Vermeer, van Gogh, and Rousseau.
Posted by Louise at 21:38

I knew all but three too (Klee, Marc, and Kahlo). I'd like to know more. I checked at the library and Amazon to see if the book is avaiable and discovered there's a whole series of these books. I'm going to suggest this one and 13 Women Artists Children Should Know to my 12-year-old granddaughter. She and I are going to do a book project this summer where we compare our opinions. Thanks for mentioning this book. It's become a good suggestion/recommendation.

What a wonderful project to do with your granddaughter Margot! And I'd be so thrilled and amazed if you looked at these books. It would be a good one for comparing opinions. It is such an intriguing series of books. I've read 13 Modern Artists too. Sadly, my library doesn't have the 13 Women Artists book. I might have to try and get it on an interlibrary loan. And I'm looking forward to the 13 Sculptures, and 13 Photos too.

Very cool book concept - glad you featured it here. I read Life With Picasso last year, written by his mistress. I enjoyed it very much and not only learned about the man behind the art, but gained a better appreciation for his modern spin on things.

Molly- the books in this series are all quite fascinating, and worth reading even as an adult. The Picasso book sounds very interesting, I've never really known much about him- he does sound an intriguing and intelligent man.

Wonderful recommendation, thank you! I just taught a lesson on Paul Klee to my 2nd grade and we already studied Van Gogh, Monet, Picasso, O'Keefe, and others. Now I want to collect these books to learn more!

Hi Karma, It's a fantastic series of books. I've read and blogged 3 now- 13 buildings, 13 artists, 13 modern artists. I've learnt lots from each and every one of them. They're beautifully presented too. I'm really impressed with how much art you've done with your youngsters- I think with your teaching they've already had more art instruction than I ever received in all my years of school. Which is why I need to read these books now. I've nearly exhausted my libraries supply- and am planning on ordering some more online.