It's an important day, that doesn't get as much press and thought as it should.

This week in Sydney an Ice Bear was created to raise awareness about global warming, and the dire situation of the polar bear. 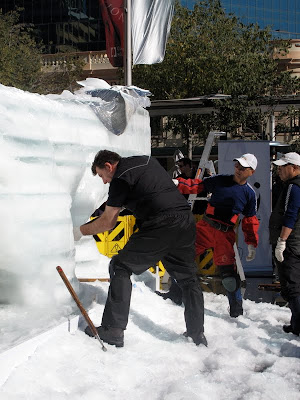 I hadn't heard of the Ice Bear programs before, but it's a fabulous concept. The ice sculptors create it and then it gradually melts away. People are allowed, and indeed encouraged to touch it- and in doing so touch the Arctic, and feel a part of the polar bears demise.

The Sydney Ice Bear is 1.8 metres high, the same height as the floating sea ice in the Arctic Ocean. Ice less than 2 metres thick is too thin to survive the summer.


An informative exhibition was set up in the area, with some terrifying facts.
Greenland is melting. Freeing one and a half Sydney Harbours per day!
Arctic soils hold twice as much carbon as our atmosphere. A warming Arctic will release this sequestered carbon into the atmosphere as CO2 and methane. Methane doesn't last as long in the atmosphere, but is 20 times more potent a greenhouse gas as carbon dioxide.

The Arctic is warming twice as fast as the global average, and may be ice free by 2030. 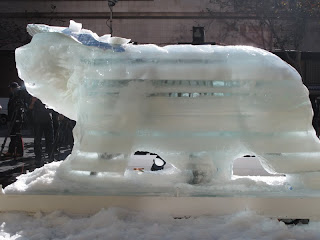 A live webcam is broadcasting the Ice Bear from Customs House in Sydney.
I learnt about the 1 million women campaign there too. And have joined up. They're looking for 1 million Australian women to pledge to cut a tonne of CO2. There are suggestions on how to do that, ways to pledge, and then track your progress.
Posted by Louise at 19:02

Nice one (not the situation of course, but the publicity and ideas)

I know what you mean Kath. So sad that we need this, but such a cool way to remind us.