I'm really not sure why I made this. I have absolutely no idea why it seemed so intriguing to me. It's not my thing at all. I don't really do raw food- well tomatoes, avocado, cucumber and fruit I guess. But I don't think I'll ever embrace a raw food diet. It seems somehow, well, wrong to my mind. Vegan is another concept that I will never fully embrace. What, give up cheese? Or butter? I'm quite happy to eat vegetarian foods, and the occasional vegan meal or snack. I don't go out of my way to avoid vegan foods, but similarly I don't really search them out. Which is why I have a tag label accidentally vegan on my low GI blog.

But for some reason after I read my friend Hannah's post last week, I was too intrigued to move on- despite her inclusion of carob, which I definitely don't eat. And found myself the very next day with ingredients to hand- nearly everything was already in the pantry-  I just had to buy some pecans. Too easy. It just had to be done.

I couldn't help but baulk at Hannah's chosen name for this dish. It's raw, so by definition can't be biscotti- Italian for twice cooked. So I initially dubbed them uncotti, but it's a bit too close to uncouth. So now I'm trying noncotti. Reminds me of nincompoop for some reason. Which is more pleasing. 
Place pecans, coconut, cocoa, salt and cinnamon in a food processor, and process until the mixture is finely crumbed.

Add coconut oil, vanilla paste, agave syrup and process until well combined, and the mixture holds together like a firm dough.

Shape the dough into a log on a biscuit tray lined with baking paper (resisting any temptation to take pictures at this rather scatological phase). Cut into more attractive strips. 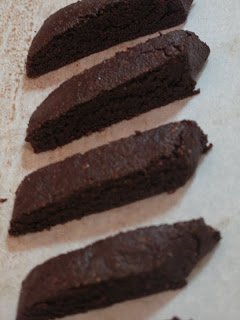 Best served the next day to let flavours blend and the cocoa take up some moisture.

Notes
I harboured grave fears as to how my husband and son would perceive this treat that I had made (partly) for them. I greeted their suspicious looks calmly and told them it was Pecan Slice. It didn't work. My 10 year old son rejected it after one bite because the cocoa was too dark- he isn't a great fan of dark chocolate as yet, despite liking blue cheese and eating kilos of it without bothering with crackers or quince paste.

I offered up a piece to my husband the day this was made. He didn't like it, and wouldn't eat any more. With such vast quantities of cocoa it is rather like eating a big big truffle coated in too much loose cocoa. It can be rather drying on the tongue. This effect was less the next day when the cocoa had had more time to soak up moisture from the coconut oil and agave syrup. I liked them ok the first day, but they were better the next day I think.

I always like to have fancy cocoa in the cupboard for this sort of thing. Supermarket brands just don't cut it. Nice chocolate shops sell much more delicious cocoa. It's worth splurging on.

Hannah's recipe used vanilla extract. I had a tub of delicious vanilla paste in the cupboard so substituted some of that.

This was a fun experiment but I won't be adopting the raw vegan lifestyle anytime soon.

This post is linked to Weekend Cooking, a fabulous weekly meme at Beth Fish Reads.
Posted by Louise at 20:30

I am not into vegan either. No milk, butter, eggs? Not for me. But those noncotti don't sound so bad really. Definitely worth a try, but I'm sure my boys wouldn't like them either.

I have the same issues -- I have no problem with the occasional vegan meal but I'm not giving up milk, butter, and eggs. I'm not even a vegetarian, although we eat vegetarian most of the time.

I think I'd rather go for chocolate biscotti and be done with it.

A valiant effort but I don't think that would be for me. One of my daughter is a vegetarian and I always look for a good recipe to make when she comes for a visit. I like your name, Noncotti, though. Good idea!

Good for you for trying! I'm with you, I wouldn't seek it out but if it's there I wouldn't make a fuss. The noncotti look good though. Great flavors in there. How about biscNOTti :)

This is a perfect post to go with mine today. I also am not sure about raw, but am interested in learning more. I could incorporate a few raw dishes a week. This recipe would also be great for lactose intolerent tummies as well I would try it for my sister who is gluten intolerent.

It the coconut sweetened?

I love the 'accidentally vegan' tag! That pretty much sums up my vegan adventures, too.

Fun post to read, and the comments too. I like your spirit in experimenting with something new. It's the only way to see if something might work.

P.S. Scatological was a new word for me. You are going to see it and your picture (if that's okay) in Wondrous Words Wednesday.

I celebrate your desire to try something new. I do love me some cocoa but I think I'll settle for your attempt. Pass me a regular biscotti instead.

This is a wonderful posting for those who are vegan, or hope to become vegan.

Rikki- the noncotti weren't too bad. I would eat them again. Not sure if I would make them again though. At least there's no competition for them in the house!

Beth F- I certainly understand the appeal of a chocolate biscotti. I think I see more worth stemming from the environmental benefits of a vegan lifestyle, than the actual dietary limitations.

Kaye- thanks. I'm sure it would be appreciated by vegans/vegetarians as a treat.

Heather- yes I had a look at your fascinating post. It's always good to try something new, and learn more about food. And yes it would be good for gluten free or lactose intolerant folks. Our dessicated coconut in Australia is unsweetened.

JoAnn- I generally prefer the accidentally vegan adventures. Glad you found a laugh too.

Margot- I'd be quite honoured to appear on Wednesday! I do like experimenting with new things- ingredients, techniques. You never know where your new favourite is lurking....

Peaceful Reader- I certainly understand that. It's not for everyone.

Oh wow! Finally an easy vegan recipe to try ^_^ Thanks! (I only need to see where I can get that syrup)

Wheeeeee! I'm glad you tried them, though if I'd have had to point you in the direction of one of my raw vegan treats that your son and husband would be more likely to enjoy, it would have been the cookie dough balls, as these are quite dark and intense. I'd also like to think that the "nincompoop" idea was partly your subconscious mind thinking of me, as I call myself that all the time :P Nincompoop language lovers represent!

(I think this comment may not be making a whole lot of sense. I shall blame that on the four hours sleep I'm working on. 9:49pm.... I think it's acceptable to try and go to sleep now. Oh look, still rambling... and still sad I won't be here in Canberra when you visit! Wheeee illogical tangent!)

Well... it looks good. I make a delicious (and dangerous) to have int he house chocolate biscotti at Christmas time. I give it to my coworkers as soon as I make it or I would eat it all. :)

Interesting recipe; i was surprised at the small amount of agave syrup. I don't really believe in strict diets involving rejection of certain foods; I rather prefer balanced diets.

Uniflame- lots of vegan recipes seem simple enough, they can have some rather specific, novel ingredients though. The agave syrup is easy to find here in Australia, every health food shop has it.

Hannah-yes it was fun to try them. I've wanted to try some of your other vegan treats, but somehow the planets aligned for this one. If I do try another one, and try to get the boys to eat them then I wouldn't mention the raw vegan part, they'd be too suspicious. I'll keep the biscuit dough balls in mind.

Sheila- real chocolate biscotti sounds even more delicious. This one I could fool myself into half believing that it might be healthy.

I think that's a very sensible approach Joumana, I do like toying at the fringe just to see what these folks are up to. Curiosity killed the cat I suppose, and got me to try raw vegan treats! It did only need a little bit of syrup. Agave syrup is quite sweet, and also the texture of my mix would have been too sticky if I'd used much more.

I totally agree about using high-quality cocoa. I bought three kilos of Valrhona cocoa powder to keep around the house, and I've never regretted it. :)