The Dog on the Tuckerbox 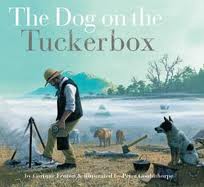 It's great to find a nice picture book that teaches a new generation of Australian kids about the more important and iconic pieces of our colonial folklore. Without being too overtly preachy, or boring. This book does that splendidly.

The Dog on the Tuckerbox is of course a famous monument outside of Gundagai in New South Wales. It is a frequent rest stop for the hordes driving between Sydney and Melbourne on the Hume Highway.


The book tells the story of the faithful dog Lady who sits waiting on her master's tuckerbox for him to return. Her master, a bullock team driver called Bill, has left her to guard his bullock team after they became bogged near Gundagai. Bill never comes back, but Lady patiently waits for him to return as a faithful dog will do. I'm reminded of my grandfather's awful dog (she loved noone but him) who pined by the gate waiting for him to return from hospital after he took his final trip there. Of course, he never did return either, but she pricked up her ears at every old man in a hat who walked in view.

In yet another moment of great synchronicity this is the second book in a row that I've read where a devoted dog is attacked and mauled by wild beasts, and needs to be sewn up with twine.

The monument is based on the legend of Bullocky Bill, as memorialised in two poems. The website from the photo credit above, gives a somewhat different version of history, which I'm not quite sure how to believe.

I can't do all this thinking about Gundagai without this song entering my head. Although it has nothing to do with the monument, or the legend of Bullocky Bill. Interesting to see that it makes the Top 30 Australian Songs of All Time!