Shaun Tan is certainly having an extraordinary year. First he won an Oscar for the animated adaptation of The Lost Thing. And now he has just been awarded this years Astrid Lindgren prize!

I'd seen the book around for a while of course (it was originally released way back in 1999!), but for some reason hadn't read it.  I haven't read all of his work yet but have been following his work for some time, and love it, I think he's one of the best illustrators working in Australia, and that he is somewhat of an illustrative genius. His illustrations are so complex and multi-faceted that I have just noticed a subtitle of sorts on the front cover- A tale for those who have more important things to pay attention to. 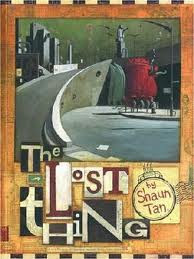 I had known for some time that the cover reminded me of something. When I got the book out of the library, I stared at it, and suddenly realised what it was. A rather D'Oh moment, a few years too late. I was rather concerned that the cover illustration was either a remarkable homage to, or indeed a direct desecendant of Jeffrey Smart's very famous Cahill Expressway (from even further back in 1962). 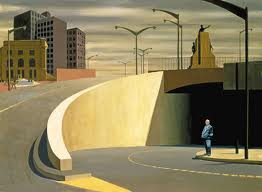 Reading the book I also had echoes of other  images nudging me. I'm not the greatest art historian, but it was disquieting. The tonings looked like the ads for the John Brack's exhibition in Melbourne in 2009. And then I found it went a little beyond the tonings, and I wasn't the only one to notice.

I was relieved when I got to the last page of the book to find an acknowledgement of sorts- APOLOGIES to Jeffrey Smart, Edward Hopper and John Brack. I was thrilled actually. I got two artistic references! But who is Edward Hopper? Again feelings of artistic knowledge inadequacy. Turns out he's an American artist. I didn't think that I knew any of his work, but this one is pretty famous I think.

I'm just not sure that I can see it in The Lost Thing. I suspect perhaps it's this? 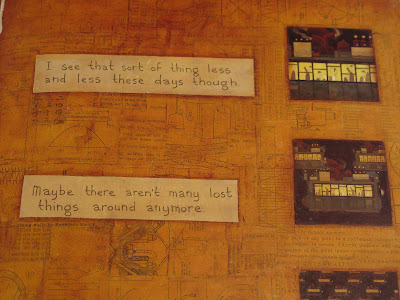 Although it's altogether possible that Shaun Tan is paying homage to a completely different Edward Hopper work, and I just don't get it. I did a Google image search of Hopper, and didn't turn up anything obvious.

So what is The Lost Thing about apart from artistic references of varying degrees of obscurity? A teenage boy, our unnamed narrator is whiling away an ordinary day, "working tirelessly" on his bottle top collection, when he notices the thing sitting on the beach. He watches it, where noone else seems to. He befriends the thing, and takes it home. I suspect it's about paying attention to the small things, being generous and helping friends. The Lost Thing also has a Western Australian feel to it according to it's author, and offers a sense of isolated reflection.

It's an enchantingly simple book, that rewards frequent rereading, like so many of Shaun Tan's books.

2016 UPDATE. Recently I went along to the fabulous ACMI exhibition about the transition from book to movie- Shaun Tan's The Lost Thing: From Book to Film. See my experience of that exhibition here.

And I can't believe it's taken me 3 years to notice the very helpful comment from Susan Pursell. Susan is all over the Hopper reference.

It's even on the same page as the reference to John Bracks Collins St 5pm. But if you don't know the art then you can't get the reference.

I wonder if there's more that I've missed? I suspect so, The Lost Thing rewards every rereading with something new.

Read my review of The Arrival.

I think that it might be the sort of book that I buy and give to Sapphire in her 'care box' that'll no doubt arrive a few months after we've found a home in Geneva....

Definitely intriguing enough to seek out. Thank you, Louise.

I think it'd be perfect for that Kath.

Well caught Louise, re the images I mean. I do know Hopper - having lived in the US. I like his clean spare lines but I'd have to look at the film closely to see if I recognise a Hopper work in it.

Thanks Sue, I'll be interested if you find any other artistic references. I'm sure there are others that I didn't get anywhere near.

Shaun Tan did not use Edward Hopper's "Nighthawks" artwork. He used Edward Hopper's "House by the Railroad" artwork. If you Google Image it, the same artwork can be seen not only in the picture book but in the last scenes of the motion picture.

Tommi, thanks so much for that. Sadly, I've taken my copy of The Lost Thing back to the library. I'll have to check it out again, and rewatch the video. Thankfully Shaun Tan's work so easily lends itself to rereading, in fact it's almost required.

You're welcome (From Tommi).

Tommi, I just went back and reread The Lost Thing, and rewatched the movie. I haven't had great success seeing House by the Railroad in either. The boys shed in the backyard is about the closest I can find, and it's not a particularly good match!

Thanks for the info about Jeffrey Smart's painting. I didn't even know he existed and your post helped me to understand the relationship to Tan's work.

It's from an Edward Hopper painting called Early Sunday Morning. It features on the page above the text, 'The next morning we caught the tram into the city.'

With all my readings and love of Tan, I had never clocked the homages to other artists at all....so you're several paces ahead of me as art historian!
But now that I've googled Hopper I can see how his people that inhabit his urban landscapes are similar to Tan's and certainly the choice of colour palette.

Susan Pursell, apologies that it has somehow taken me 3 years to notice your most excellent comment. I'm thrilled to find it, so much that I've updated the original post.

Thanks Brona, I enjoy art, and learning about it, but clearly I've only dabbled about the edges - so much still to learn. I agree with you about the colour palette.